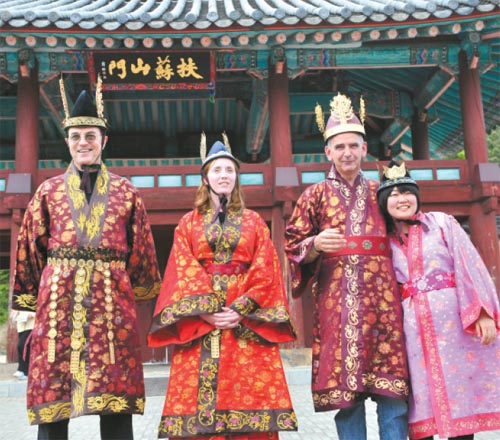 Head of the Korea Tourism Organization Lee Charm, left, poses in clothing from the Baekje kingdom with the family of an ambassador to Korea during a two-day tour of Buyeo and Gongju, South Chungcheong over the weekend. [YONHAP]

For 55 years, South Chung-cheong’s Baekje Culture Festival has been a modest regional celebration of one of Korea’s ancient three kingdoms. But this year, the local government is taking it international, running activities to attract foreign visitors to the event from Sept. 18 to Oct. 17 in the district of Buyeo and city of Gongju.

With it comes a new name, the 2010 Great Baekje World Festival.

Foreign ambassadors to Korea from 10 countries visited Buyeo and Gongju on Saturday and Sunday with 100 members of a group called the Korea Tourism Supporters.

During the tour, the envoys offered their advice on how to improve the festival for global tastes. They visited various tourist attractions including both areas’ national museums and various regional mountain fortresses.

The event centers on the ancient Baekje kingdom, which was a hub of vigorous cultural exchange in East Asia for 700 years from 18 B.C. to A.D. 660.

Organizers hope to attract 200,000 foreign tourists this year with parades, rituals and memorial ceremonies for the four great kings of Baekje.

“A Day in Sabigung Palace” will offer re-enactments a royal procession, an enthronement ceremony and a traditional welcoming party for foreign envoys. Various rare relics from Baekje will also be put on public display, some for the first time in years.

The Korea Tourism Supporters is a network composed of well-placed people in Korean high society, professionals in various fields and regular citizens with an interest in tourism. The ambassadors’ tour was the group’s third event, following tours of Suncheon, South Jeolla, in February and Goyang, Gyeonggi, in March. The association currently plans to hold regional tour events twice a month starting in July after an official launch ceremony on June 24.

To become a member of the Korea Tourism Supporters, visit http://cafe.naver.com/koreasupporters or call (02) 729-9466.