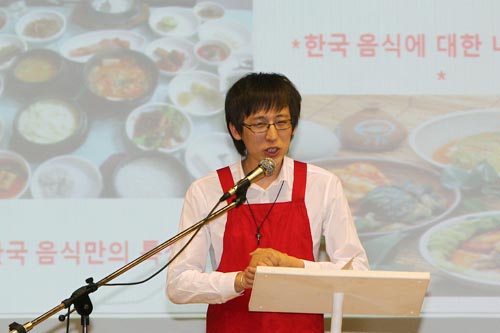 On Saturday, foreigners from all over the globe gathered at the Crown Building of Kyung Hee University. They were there to celebrate the Korean language and the birthday of its inventor, King Sejong, at the 13th World Korean Language Speech Contest for Foreigners.

A total of 1,119 applicants from 29 different countries competed in the fierce preliminary rounds, out of which 22 made it to the finals. Strict categories were used to judge the contestants, including speech content, flow, stage manner, cohesion, pronunciation and level of bonding with the audience.

The participants in the 13th World Korean Language Speech Contest for Foreigners delivered speeches, some in near-fluent Korean, on various topics, most addressing different experiences in Korea. Contestants spoke of what they perceived to be true “Koreanness” and Korean beauty, and an intently listening audience laughed and clapped as they gradually grew more and more emotionally involved.

One contestant from China spoke of her experiences in Busan, and her initial difficulty understanding the area’s strong accent and dialect. She told a funny anecdote about a misunderstanding with her employer at her part-time job, and her convincing delivery of Busan dialect drew much laughter from the audience. 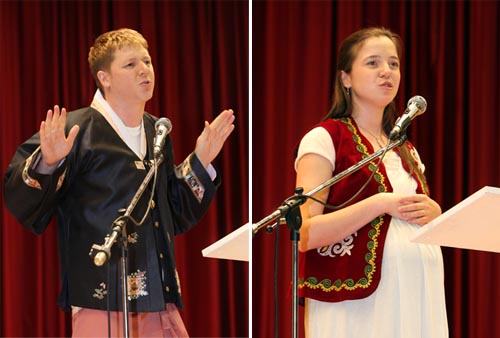 Contestants from Mongolia, the United States and Armenia deliver speeches on their personal experiences with the Korean language, culture and people at the World Korean Language Speech Contest for Foreigners at Kyung Hee University. [YONHAP]

“At first, I had no idea what my employer was trying to tell me,” she said. “I thought it meant something bad, but I realized later that he was just thanking me for working hard that day.” A warm atmosphere filled the auditorium as she ended her speech by talking of the inimitable Korean “jeong,” a strong sense of affection that touched her during her stay.

An Indian contestant described his partiality for bibimbap, a Korean dish of rice, vegetables and red pepper paste mixed in a bowl.

“It’s incredible how many different ingredients go into this one tasty meal. It’s my favorite Korean food,” he said.

His fondness for Korea was palpable when he talked about how disappointed he is that Korea is fast losing its natural landscapes, and is instead being overcrowded with tall buildings and apartments.

An Armenian contestant related her struggle to overcome Korean prejudices against marrying foreigners. Today, she enjoys a happy marriage to a Korean husband and a close relationship with her in-laws, who turned out to be kind and caring once they accepted her into their family. She ended her speech by saying, “Saranghamnida Daehanminguk” - “I love you, Korea” - punctuated with a wide smile.

Other contestants from countries including the United States, Indonesia, Mongolia, Nepal, Kyrgyzstan, England, Iran and Japan talked of their love for K-pop, taekwondo, Korean dramas and samulnori percussion quartets.

The gold medal went to Morgantamar from Mongolia, who talked about Korean cuisine, tteokbokki in particular. He currently studies Korean at the Institute of Global Education at Kyung Hee Univeristy and plans to study computer science at Kwangwoon University next year.

Even after the awards ceremony concluded, members of the audience lingered, talking amongst each other about how amazing it was that Korea and Korean culture had grown so well known across the globe. Some could be heard speaking of the shame they felt at neglecting other countries’ culture while foreigners embraced and pursued Korea so vigorously.

The speech competition not only provided an opportunity for foreigners to display their remarkable talents in Korean, it induced discussion among Koreans on the value of their national language and the need to work to abolish race-based prejudices. Most of all, it recognized the foreigners who have already committed so much time to their new home, becoming cultural ambassadors.