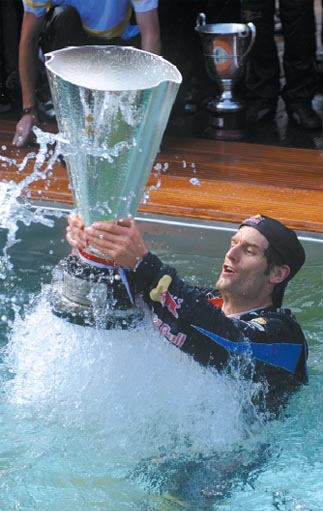 Mark Webber celebrates in the pool after the Monaco Formula One Grand Prix on May 16. [AFP/YONHAP]

Webber’s fourth career win moved him top of the Formula One standings ahead of teammate Sebastian Vettel, who overtook Robert Kubica of Renault at the start to finish 0.4 seconds behind. Both Red Bull drivers have 78 points from six races, but Webber leads thanks to his two race wins.

“To win here is a very, very special day,” said Webber, the second Australian driver - after Jack Brabham - to win the iconic seaside race. “This place is such a test for two hours.

“Absolutely incredible, and for sure the greatest day of my life today.”

Kubica held on to third place, while Felipe Massa of Ferrari was fourth ahead of McLaren’s Lewis Hamilton.

Five-time race winner Michael Schumacher dropped out of the points - from sixth place to 12th - after receiving a 20-second penalty for illegally overtaking Fernando Alonso at the last corner.

Schumacher passed Alonso just after the safety car had come on the track, claiming his move was O.K. as the two crashed cars had been taken off the circuit by then.

“The cars were removed. There was no further need” for the safety car, Schumacher said. “So I took my opportunity.”

Alonso, who benefited from a timely pit stop early on to storm through the field and overcome a last-place start, is third in the overall standings with 73 points for Ferrari.

“I’m not 100 percent on the rules, but I trust my team,” Alonso said. “My team was saying no overtaking on the last lap.”

Webber became the first Australian since Alan Jones in 1980 to win back-to-back races after taking last week’s Spanish GP from pole. He was worried late on as he watched Jarno Trulli’s Lotus fly over the top of Karun Chandhok’s HRT car at La Rascasse corner in the closing stages.

“I thought: ‘What the hell is going to happen here?’” said Webber, who had to endure four appearances by the safety car. “I just hoped I had some options to go on the inside.”

Red Bull appears to have put reliability issues behind it as it scored its second 1-2 of the season after taking a sixth straight pole position to also take the constructors’ championship lead.

“All in all it was a very good day for us,” said Vettel, who wasn’t completely satisfied with his car. “We can sleep well tonight.”

Defending F1 and Monaco champion Jenson Button’s day ended on the second lap when his McLaren’s Mercedes engine overheated after his mechanics forgot to remove a part before the start. Alonso started in the pit lane because his Ferrari couldn’t take part in qualifying due to a crash in practice.

Massa’s 71 points put him one up on Button, while Hamilton and Kubica share 59.

The French Riviera race get off to a dramatic start with Nico Hulkenberg’s opening-lap crash. The rookie Williams driver slammed into the barrier inside the tunnel - the fastest section of the narrow course - after running wide. Button’s engine started spewing smoke with the safety car out.

Alonso immediately pitted for a mandatory change of tires that he would run to the close on.

Before that, Webber had defended his pole position cleanly while Kubica didn’t on his start, as Vettel moved up the inside to go second around the first corner. Both Red Bulls pulled away from the field from that point, despite the safety car bunching the field back several times.

“We have to be positive, nobody was expecting us to finish on the podium,” Kubica said. “There was no real chance [for second] unless Sebastian made a mistake. And he didn’t.”

Two-time winner Alonso, who overtook a number of cars at the exit of the tunnel to move up the field, lost his grip at the last turn as the safety car came in and Schumacher craftily jumped ahead.

“I saw Lewis [going] very slow in the lap so I asked the team if they were sure we can’t overtake but the team repeated to me not to overtake,” Alonso said. “So when I saw Michael, I was surprised.”

The safety car re-emerged on the 32nd lap after Rubens Barrichello crashed into the barrier at Massenet - the same spot where Alonso went out in practice on Saturday. The Williams driver then carelessly flung his steering wheel onto the track as cars moved past.

Half of the 24 cars in the field failed to complete the 78-lap race in the Mediterranean principality.