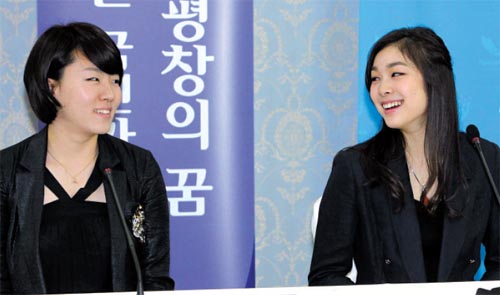 
Korea’s biggest stars from the 2010 Vancouver Olympic are getting behind the bid to bring the 2018 Winter Games to Pyeongchang County, Gangwon.

“It’s an honor to be named to the athletes’ committee after being appointed as its honorary ambassador,” said Kim Yu-na. “I’ll work hard to spread the word about Pyeongchang’s bid every chance I get.”

“We need a lot of help and input from the athletes who have experience,” said Kim Jin-sun, the governor of Gangwon and co-chairman of the bid committee. “It’s important to carry the momentum started in Vancouver toward winning the 2018 bid.”

The bid marks Korea’s third attempt to host the Winter Games, and the committee is betting that the athletes’ participation can increase their odds.

By bringing their knowledge and expertise to bear on construction of the venue, they said, Korea can put the needs and interests of the athletes at the forefront of the 2018 Games.

“I was a little uncomfortable when I competed in Vancouver,” said Kim Yu-na. “A separate ice surface for figure skating is ideal, but we had to share the venue with short-track speed skaters. I can provide help in such areas.”

Korea is coming off its best-ever finish at the Winter Games, having earned a total of 14 medals - six gold, six silver and two bronze - the seventh highest total in Vancouver. Korea National Sport University’s speed skating heroes Mo Tae-bum, Lee Sang-hwa and Lee Seung-hoon surprised a lot of people by winning three gold and two silver medals between them.

Pyeongchang is going up against Munich, Germany, and Annecy, France, in the race to host the 2018 Games.

The winning bid will be announced at the International Olympic Committee general meeting in Durban, South Africa, in July 2011.