A festival where actions speak, not words

A festival where actions speak, not words 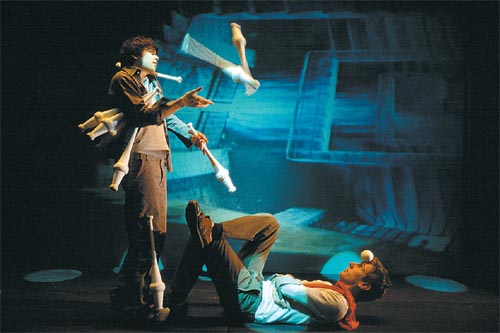 “Odotustila” a contemporary circus performance piece by Ville Walo and Kalle Hakkarainen from Finland, is among the four official performances to be presented at the Chuncheon International Mime Festival 2010.

The city of Chuncheon in Gangwon, about a one-hour drive from northeast Seoul, is many things to many people. It is known among travelers as a beautiful lakeside city with some of the cleanest water in the nation, among Korean drama lovers as the home of the popular KBS drama “Winter Sonata” (2002) and among food lovers as the home of dakgalbi (spicy chicken with rice cakes).

But every year at this time, these attractions take a back seat as the city becomes the backdrop for a weeklong festival of nonverbal theatrical works by companies from around the world.

The Chuncheon International Mime Festival, which begins on Sunday and marks its 22th anniversary this year, will showcase the works of some 90 companies from Korea and 10 companies from six countries, including the U.K. and France.

The festival, which started as the Korea Mime Festival in 1989, was initially a small festival held for a couple of days with performances by a handful of Korean mime artists. It took its current name in 1994 and is now the biggest nonverbal performing arts festival in Asia with a full program that includes street parades, workshops and conferences.

When people hear the word “mime,” they are likely to conjure images of a lone and silent actor clad in black with white pancake makeup performing physical charades, but the genre can include virtually all performing arts, says Yu Jin-gyu, artistic director of the Chuncheon International Mime Festival. Yu started the festival 20 years ago.

“Theoretically, mime is a way of expressing what you want to say through your body, without language, and the methods of expression can be very diverse, including not only stage performances, but also juggling, acrobatics, magic shows and even circus acts,” Yu said in a recent interview with the JoongAng Sunday. 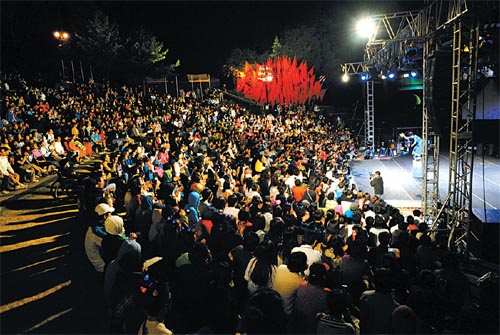 “Dokkebi Nanjang” is one of two all-night, large-scale, outdoor performance events at the festival. It will start at 10 p.m. on May 29 and continue through 5 a.m. the following day. Provided by the organizer

The festival will open this Sunday at noon along Brown Fifth Avenue in front of M Department Store in Chuncheon with a special ceremony called “Ah! Soolajang” (ahsoolajang means “chaos”).

The ceremony starts with street performances and ends with a symbolic battle of fire and water as water balloons fall everywhere.

The highlight of the festival is of course the four official festival performances, which have been presented to great acclaim at other nonverbal performance festivals around the world.

The list of works includes “The Overcoat,” a physical theater piece based on the short story of the same name by Nikolai Gogol. It is performed by the British duo Gecko, which presented the piece at the 2009 Edinburgh Fringe Festival. In addition, Ville Walo and Kalle Hakkarainen from Finland present “Odotustila,” a new type of circus performance piece, and well-known French mime artists Patrice Thibaud and Philippe Leygnac present a contemporary mime performance piece called “Cocorico.”

“I need to get back to the essential - the art of mime. [It is] the gesture that precedes the word, a return to the first language, the original form of communication between men, comprehensible by everyone, and universal,” Thibaud said in a press release last week. “Mime is the basis for this show - a return to the essential then, through the language of the body.” 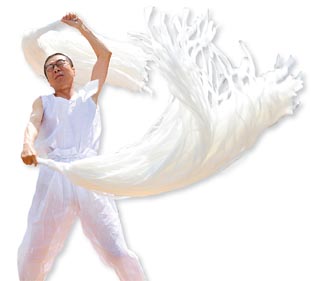 Yu Jin-gyu, the renowned Korean mime artist who started the Chuncheon International Mime Festival and currently serves as the artistic director of the festival

In addition to these performances, there will be another, smaller stage set up for amateur performers to show their stuff.

There will also be plenty of other activities in and around show time.

The “Friday Madness Night” event, which will be held from 10 p.m. on May 28 to 5 a.m. the next day, is an all-night multimedia performance with installation art, experimental theater and dance.

“Dokkebi Nanjang” is a carnival-like event with outdoor performances that run all night, starting at 10 p.m. on May 29 and continuing through 5 a.m. the following day.

There will also be a conference for the artistic directors of international mime festivals, a series of exhibitions related to nonverbal performance and workshops that allow attendees to learn about mime.

*The Chuncheon International Mime Festival runs from May 23 to 30. All festival events will be held in Chuncheon at one of five indoor theaters - Mime House, Momzit Theater, Bomnae Theater, Chuncheon Culture & Arts Center, Chuncheon Puppet Theater - and outdoors at Udamari, which is an area near the Chuncheon Children’s Hall, as well as at locations in downtown Chuncheon. For more, call (033) 242-0585 or visit www.mimefestival.com.