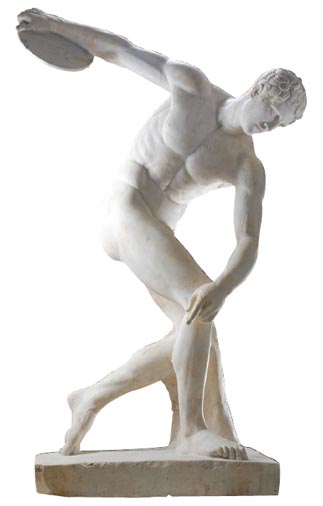 “Diskobolos,” a 2nd-century Roman marble copy of the lost bronze original by the Greek sculptor Myron in the middle of the 5th century B.C. ⓒ The Trustees of the British Museum

Greek marble statues and the jars with two handles called amphoras are classic exhibits in major European museums. But these pieces come to have an exotic aura, sparking fresh interest, when they travel to an area with a completely different culture such as East Asia. The same is true of the classic art pieces in the “Gods, Heroes and Mortals: Art and Life in Ancient Greece” exhibition currently going on at the National Museum of Korea in Ichon-dong, central Seoul.

The show, which is being held in the museum’s Special Exhibition Gallery, has more than 130 pieces from the British Museum, including the famous marble “Diskobolos.”

The first section in the exhibit shows sculptures of Greek gods such as Zeus and Dionysus, heros such as Herakles (Hercules) and monsters such as the Sphinx. This section also includes amphoras whose surfaces are painted with scenes from Greek mythology. The marble sculpture of the Sphinx - with its very classic human head, the body of lioness and wings - has a particularly grotesque beauty. 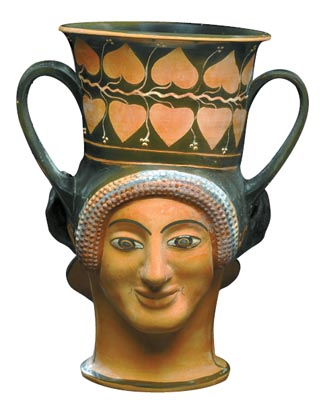 “Ancient Greeks thought these bizarre creatures came from outside Greece, reflecting the worldview of the ancient Greeks,” Shin So-yeon, curator of the exhibition, said. “On the other hand, the hero Herakles, who was born human but overcame adversity to become a god, shows the values of the ancient Greeks, who emphasized physical training and athletic activity.”

The second section highlights the physical ideals of the ancient Greeks, with marble sculptures of male nudes. The section also includes bizarre or satirical human figures, including a wine cup with a figure of a bearded satyr on one side and that of a maenad on the other. Both were wild followers of the wine god Dionysus.

The third section, which is about the Olympic Games, shows sculptures including Diskobolos and pottery depicting various scenes of athletic competition. The competitions were not only part of training for battle but also a way to create a healthy body, which the ancient Greeks held in high regard.

The fourth section has less famous pieces, but it might be the most interesting. It deals with the daily life of the ancient Greeks from birth through marriage, war and death.

“Whereas early Greek art generalized the human form and chiefly depicted ruling class values, later Greek art included depictions of people with a diverse range of characteristics,” Shin said. “This stemmed from the interchange with various other peoples, which was a result of Alexander the Great’s territorial expansion and conquests.”