Korea’s need for the X factor

Korea’s need for the X factor 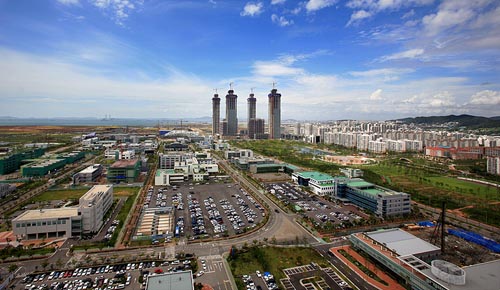 The Songdo Landmark City in the Incheon Free Economic Zone aims at being a sustainable and futuristic city. [JoongAng Photo]

South Korea has clawed its way out of poverty by becoming a manufacturing powerhouse. But to stay a world-class economy will require the country to draw on a different set of skills. In the future, it will be the ability to create - as distinct from the ability to produce - that will foster innovation, and with it, sustainable economic growth.

Whether it is new ideas, new business models, new cultural forms, new technologies or new industries, it is creative capital that will drive the world economy. The ability to harness creativity will be the biggest challenge, as well as the biggest opportunity, for Korea.

Our analysis of data from 45 countries shows that the following four key factors - we call them the “4Ts” - drive economic growth and prosperity: technology, talent, tolerance and territory assets. Each is critical to generate the social and cultural conditions forming the ecosystem of an enduring, successful creative economy.

Technology. Successful communities and organizations must develop the mechanisms for transferring research, ideas and innovation into marketable and sustainable products. Universities are paramount, and act as key hub institutions in the creative age. Happily for Korea, technology is one of its greatest strengths. Broadband access is ubiquitous. The nation’s technical education system is first-rate. Proposals to aggressively expand and update the nationwide fiber-optic broadband network will help Korea consolidate this advantage. It is vital that Korea continues investment in R&D and to recruit foreign technology companies.

Talent. We live in an age of frenetic mobility. People, especially top creative talent, shift quickly and easily to locations where work and living conditions suit them best. The war for talent is the struggle of the creative age. Korea is reasonably well positioned in this struggle. It ranks sixth on the R&D index, a measure of research and development expenditures; 10th on the human-capital index, which measures the percentage of people with college degrees; and 13th on the scientific-talent index, which examines the number of researchers per capita.

And yet Korea has only about four million workers we would define as members of the “creative class.” That is only 20 percent of the national workforce. This compares poorly with the U.S., where creative workers make up 30 percent of the workforce, or Ireland, which tops the rankings with creative class workers accounting for 39 percent of jobs. Korea excels in science and technology, but beyond these fields its creative class remains underdeveloped.

Tolerance. Prosperity depends on creativity in many forms - cultural, entrepreneurial, civic, scientific and artistic. Creative workers with these talents need communities, organizations and peers that are open to new ideas and different people. Places receptive to immigration, alternative lifestyles and new views on social status and power structures reap big gains in the creative age. On the values index, which measures the degree to which a country espouses traditional values instead of more modern, secular values, Korea, with its strong sense of family and tradition, ranked ninth out of 45 countries (Japan ranked first). This high ranking no doubt has played a role in creating Korea’s tight-knit, proud and orderly society.

But it can also be a liability. It helps account for the country’s much lower position on the self-expression index, which measures people’s attitudes regarding the right to publicly espouse alternatives and individual choices that run against the grain or prevailing opinion. On this metric, Korea ranks 34th out of 45 countries (Sweden comes in first). In a 2008 survey, 42 percent of Korean respondents claimed they had never had a conversation with a foreigner.

This puts Korea at a disadvantage in promoting entrepreneurship, and attracting expatriate workers from countries more accepting of different ways of life. If the global creative class sees Korea as an inhospitable environment for their professional and personal aspirations, they will seek their fortunes elsewhere. So far, they have done exactly that. Beijing, which has three English-language weekly entertainment guides and an increasingly visible English-speaking expatriate community, has a livelier international scene than Seoul. And the challenge isn’t limited to attracting “outside” talent. Young, creative Koreans studying abroad have many options. If they don’t feel their native country offers them at least an approximation of the freedom of self-expression they’ve come to enjoy in, say, New York or London, why should they limit themselves and their entrepreneurial energies, why should they return?

One could argue that Korea, with a relatively small and ethnically homogenous population, cannot hope to emulate the heterogeneity of the U.S. or Europe - and perhaps shouldn’t even try. Homogeneity does have its benefits, after all. Among them are greater social cohesion. But in economic terms, these advantages are small in comparison to the benefits of heterogeneity. Diversity does not necessarily require new immigrants; but it does require that people on the edges of Korean society - artists, bohemians and gays - enjoy space and tolerance to fulfill their potential. It requires openness to new ways of living.

The creation of the “Incheon Free English Zone” program, which is trying to make that city more conducive to English speakers (The program’s official slogan is “Smile with English”), is a positive start. English is the lingua franca of global business. To compete against Hong Kong, Singapore and even Beijing, Korea must find ways to accommodate residents who aren’t fluent in Korean. Forward-thinking initiatives should extend to the easing of entry and job regulations for foreign students.

Territory assets. Territory assets include the natural, built and psychological settings of the community - and the distinct vibe that makes those communities unique. Competitive cities and nations in the 21st century will be those that are open, dynamic and aesthetically inspiring. Talented, mobile workers are attracted by the opportunity to be around other highly engaged and intelligent talent in arenas that are beautiful and authentically lively. They like densely populated cities where they can socialize naturally - in cafes, restaurants, bookstores, music clubs and other unique social and commercial spaces.

Thus thoughtful urban development is essential; it is also surprisingly difficult. Cities must strike a delicate balance between encouraging such places and yet resisting the temptation to create artificial environments. The connectivity between Incheon and Seoul suggests the infrastructure is in place for developing attractive territory assets. The fast train between these two cities is a positive, growth-sustaining step; globally competitive commercial centers benefit from well-run public transportation systems.

After considering macroeconomic stability, political maturity, trade and investment policies and educational attainment, in 2005 Goldman Sachs declared Korea one of its “next 11” - the countries with the greatest potential for growth. The Economist Intelligence Unit has ranked it third in IT competitiveness. Korea is poised for continued success. But it is only by harnessing the creativity of its people that it can turn these strengths into greatness.