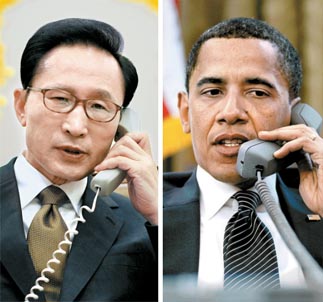 Their position, as described by the Blue House, indicates that the two countries believe North Korea was responsible for the sinking of the South Korean warship Cheonan in March.

According to the Blue House, Lee and Obama had a telephone conversation yesterday to exchange views on the investigation into the Cheonan sinking, and on the state of the Washington-Seoul alliance. The South Korean presidential office said Obama supported South Korea’s response to the incident and said he “fully trusts” the investigation conducted by a team of international experts.

Lee and Obama didn’t explicitly name North Korea as the culprit for the sinking that claimed 46 lives, but they urged North Korea to halt its “belligerent” actions.

“President Lee and President Obama agreed that North Korea must honor its international obligations under United Nations Security Council Resolution 1874 and its commitment to dismantle its nuclear weapons programs,” a statement by the Blue House read. “At the same time, the leaders said North Korea must stop its belligerent course of action and that they will strengthen their alliance.”

The Blue House also said Lee told Obama that the Cheonan investigation was being carried out “scientifically and objectively, as had been our goal.” The South Korean president also expressed his gratitude for the participation of American experts in the Cheonan probe and said, “In the aftermath of the Cheonan sinking, the people of South Korea appreciated the value of the South Korea-U.S. alliance.”

A White House statement said, “The two leaders emphasized the importance of obtaining a full accounting of the event and committed to follow the facts of the investigation wherever they lead.” It said the leaders “pledged their utmost efforts to ensure the security of the Republic of Korea, its armed forces, territory and its people.”

The White House also announced that U.S. Secretary of State Hillary Clinton will visit Seoul next week for further consultations on the Cheonan incident. Clinton will travel to Beijing for an annual two-day strategic dialogue slated for May 24 to 25, and could make a Seoul stop on her way back to Washington.

The presidents’ phone conversation was the latest display of solidarity between the two countries. The United States also backed the South Korean stance that the stalled six-party nuclear talks should not be resumed before the completion of the Cheonan investigation. Last week, a bipartisan group of U.S. senators introduced a resolution calling for the international community to comply with UN resolutions that impose sanctions on North Korea for its nuclear and long-range missile tests.

South Korea is considering raising the Cheonan issue at the UN Security Council should North Korea be determined the guilty party. The United States is one of five veto-wielding permanent members of the Security Council, at which unanimity is necessary for any binding resolution.

The leaders’ phone chat came two days before the scheduled announcement of the results of the Cheonan probe. Lee is expected to make a national address next week.

Investigators have suspected a possible torpedo attack by North Korea to be the cause, but North Korea has denied any responsibility.

Its latest denial came late Monday. According to North Korean state media, Yang Hyong-sop, vice president of the Presidium of the Supreme People’s Assembly, blamed South Korea for trying to raise tensions on the peninsula with wrongful accusations against North Korea.

“South Korea is attempting to escalate confrontations by falsely linking the sinking of its warship to us [North Korea],” Yang was quoted as saying. “We will never stand idle by against hostile provocation from the South.”

The Supreme People’s Assembly is the highest organ of power under the North Korean constitution. North Korea’s first official denial came on April 17, when an unidentified military commentator issued a lengthy statement to accuse Seoul of “plotting against” Pyongyang.

In a highly unusual development, North Korea announced yesterday it will hold its second parliamentary session in less than two months in June. The country’s leader, Kim Jong-il, will likely attend the meeting.

The last session of the Supreme People’s Assembly was held on April 9. Since 1998, North Korea’s rubber-stamp parliament has met only once each year, except in 2003. The June session will come a month after Kim Jong-il’s visit to China.