Korea’s moment in the spotlight

Korea’s moment in the spotlight 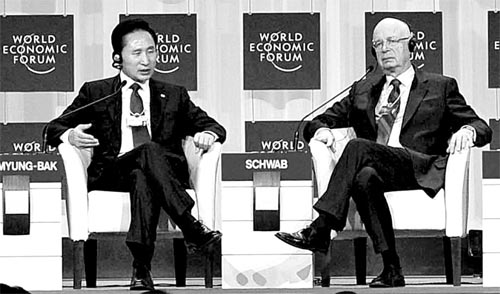 President Lee Myung-bak talks with Klaus Schwab, the Executive Chairman of the World Economic Forum, after making a special speech as Chairman of the 2010 Seoul G-20 Summit in Switzerland in January. [YONHAP]


The global economic architecture is undergoing reform of historic dimensions, with profound consequences for many formerly underrepresented nations in the world’s power structure. The G-7 of high-income democracies has been replaced by the G-20 as the most important global economic grouping. The G-20 includes both lower-income countries such as India and Indonesia, and nondemocratic countries such as China and Saudi Arabia. The International Monetary Fund (IMF) is revamping its quotas, voting rights and allocation of seats on its board of directors. Major emerging-market economies have joined the steering committee of the World Trade Organization. The new Financial Stability Board, which is coordinating national reforms of financial regulation, has expanded to include all developing members of the G-20.

These systemic changes reflect two dramatic power shifts in the global economy. The first is a shift toward emerging economies; these nations comprise half the G-20 and are the recipients of almost all the increased positions in the IMF. South Korea was among the chief recipients of the quota increases adopted by the IMF Board of Governors in 2008, thus winning a greater share in fund decision making. The second is a shift toward Asia. There was only one Asian country in the G-7 (Japan) but there are at least five in the G-20 (Japan, China, India, Indonesia and Korea), and seven if Australia and Russia are counted as “Asian” (as they are, for example, in the APEC1 forum).

There are four reasons why Korea is poised to play a major role in the transformation of the global rules and institutions. First, Korea occupies a middle position on the G-20 income scale. Its per capita income of about $20,000 places it squarely between the high-income group that made up the traditional G-7 (and Australia) and the lower-income countries that comprise the rest of the membership. As the first emerging-market economy (along with Mexico) to join the “rich man’s club” of the Organisation for Economic Cooperation and Development (OECD), Korea has acquired valuable experience in working with the developed world. Hence it can play an especially valuable role in bridging the interests, and thus the views, of the two sets of countries that could otherwise polarize the G-20 and render it ineffectual.

Second, Korea, with a GDP of almost $1 trillion (about the same as Mexico and Australia), occupies the middle of the G-20 in terms of economic size. Hence, it can embrace the viewpoints of countries of different magnitudes.

Third, Korea is strategically located between China and Japan. Koreans have traditionally viewed their “sandwiched” geography as a liability - indeed, as a threat to their national survival. But the country’s ability to moderate between the two Asian economic superpowers is beginning to look like a uniquely positive attribute. Much of the debate over a new Asian economic architecture, for example, is essentially a contest between China (with its preference for the construct of the Asean Plus Three) and Japan (with its Asean Plus Six alternative). But Korea is already pursuing a “G-3” in northeast Asia that would include new trade agreements among China, Japan and itself rather than the bilateral Japan-Korea and China-Korea formulations that were initially proposed by its larger neighbors.

Fourth, Korea is in an ideal position to reconcile the pressures for pan-Asian economic cooperation and the need for continued trans-Pacific institutional arrangements. Adoption of Asia-only agreements without parallel progress across the Pacific would essentially repudiate the conceptual framework that was agreed to 20 years ago when the Asian and North American economies formed the APEC forum and agreed to pursue “free trade in the Asia-Pacific area.” An Asia-only economic policy runs a risk of “drawing a line down the middle of the Pacific,” in the famous words of former U.S. Secretary of State James Baker III, with severe consequences for security as well as economic relations among the countries on the two shores of that ocean.

Korea is especially qualified to bridge this divide because of its close ties with both sets of nations. Its long-standing alliance with the United States, in particular, could enable it to promote continued U.S. engagement in East Asia even while that part of the world integrates its own economies. Korea played a decisive role in the evolution of APEC itself, negotiating the entry of China along with Hong Kong and Taiwan during its chairmanship in 1991, and thus occupies an unusually credible position from which to promote trans-Pacific progress that does not shut out the United States and Canada.

Korea is already building on its unique strengths to forge the most creative, and most constructive, trade policy of any major country. It has negotiated, or is in the process of negotiating, free trade agreements (FTAs) with countries of every size, income level and geographical position. It is thus blazing a trail for the multidimensional and crosscutting pattern of trade relations that can lead the way toward further liberalization without erecting new regional blocs or other potentially divisive groupings. (Singapore followed a similar path, for which it deserves much credit, but is simply too small to have the same impact on global trade patterns and policies as Korea.)

Since its initial FTA in 2004 with Chile - an effort that required three attempts to win passage in the National Assembly - Korea has now completed negotiations with Asean, the European Union, European Free Trade Association (EFTA), India and the United States. The significance of this FTA portfolio is its range. It encompasses rich countries (Canada, Japan and the United States), poor countries (most of Asean, China and India), and fellow middle-income countries (Chile and Mexico). It includes economies that are large (China, the European Union, Japan, the United States), small (Chile, much of Asean), and in between (Canada, India, Mexico, some in Asean).

But it is the geographical diversity of Korea’s FTA partners that is most striking. Seoul has participated fully in the movement toward Asian economic integration. At the same time, it has concluded compacts with the United States (now awaiting approval by the U.S. Congress), Chile and Mexico that achieve the trans-Pacific linkage suggested above as essential to prevent the emergence of an exclusionary Asian bloc. Korea has also done a deal with the European Union, eliminating the risk that the Asia-Europe “third leg” of the diplomatic stool (in addition to pan-Asian and trans-Pacific) would be ignored.

By its own trade policy actions, Korea has shown visionary leadership in building the global economic architecture. It has offered a powerful demonstration of how the economic benefits of additional trade liberalization can be achieved while minimizing new discriminatory patterns that can hurt economic relations, foreign policy and even national security.

Korea’s most obvious, and most important, immediate role is as chairman of the G-20 throughout 2010 (and, under the troika system of past/current/future chairs that manages the G-20, as a coleader in at least 2011 as well, when France assumes the chair). A successful chairmanship would give Seoul a solid leadership record, and pave the way for other Asians and other emerging markets to follow its lead. The following are six major areas where Seoul can make a difference:

Coordinated exit strategies from the crisis policies of 2008-09

A comprehensive agreement on global warming, including its close linkages to the world trading system (to avoid an outbreak of “green protectionism”) and to help finance new controls on carbon emissions in poor countries

The international role of the dollar, perhaps inter alia through creation of another $1 trillion of Special Drawing Rights (SDRs) at the IMF over the next five years

On more specific trade issues, Korea should build on its sterling record to avoid the risk of new trans-Pacific fissures as Asia’s new preferential trading arrangements take shape. Its best step in that direction would be to join the Trans-Pacific Partnership, the small group of four countries (Brunei, Chile, New Zealand and Singapore) that already has three likely additional entrants (Australia, Peru and Vietnam) and was given an enormous recent boost when President Obama announced that the United States would now reengage with it, as soon as the U.S. Congress ratifies its FTA. This step would almost certainly induce Japan to join as well.

At that point, the group would constitute a critical mass that could make it an influential player in advancing toward the goal of a Free Trade Area of the Asia-Pacific (FTAAP) - the updated version of the Bogor goal of free trade in the region agreed upon by the APEC leaders in 1993 and 1994. This strategy, pursued in parallel with the Asia-only initiatives, could avoid “drawing a line down the middle of the Pacific” while restoring needed momentum to global trade expansion and perhaps even galvanizing renewed interest in the Doha Development Agenda.

Korea enters the 21st century ready and able to play a historic role in modernizing and reforming the world economy. Right now, developing economies account for about half of global output, and that percentage is rising every year. With its own economic success - still the most dramatic sustained development story in world history - as both backdrop and stage, Seoul will be a pivotal player in a century that will undoubtedly see Asia’s continued rise.

*The writer is director of the Peter G. Peterson Institute for International Economics.