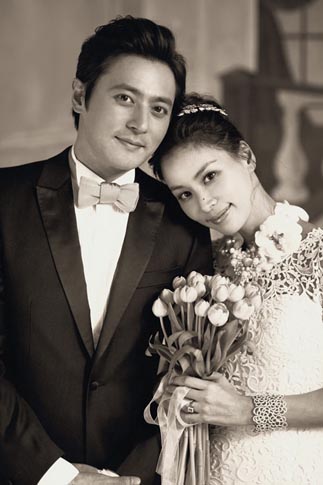 With an increasing number of celebrity couples, including actor Jang Dong-gun and actress Ko So-young, above, announcing that they are pregnant before marriage, some youth group leaders are concerned about the impact of the trend on teenagers. [JoongAng Ilbo]

Koreans have long lived under the influence of Confucianism, especially where relations between men and women are concerned. As recently as a couple of decades ago, parents educated their children using the Confucian idea that “a boy and a girl should not sit together after they have reached the age of seven.”

Today, however, the once strictly conservative country is becoming more open-minded about premarital sex. And premarital pregnancy is more often regarded as a social phenomenon rather than a social problem. These days, when a celebrity couple announces they are getting married but admits they are already pregnant, the response they receive from the public is no longer negative and is even trending toward the positive.

But people who work with teenagers are growing increasingly concerned about the potential negative effects of the trend on young people, many of whom want to become celebrities themselves.

According to a survey done by a Web portal for children hosted by Daum Communications (http://kids.daum.net) in March, one in every two students surveyed replied they wanted to become a celebrity in the future.

Jang Dong-gun and Ko So-young are just two in a recent line of celebrities who have married and announced premarital pregnancies. When Jang and Ko married earlier this month, Ko was already five months pregnant. Then there’s Yang Hyun-suk, CEO of YG Entertainment, and Lee Eun-joo, a member of the defunct girl group Swi.T. who is 12 years younger than Yang. Lee recently announced she was four months pregnant and the couple is planning to get married. Meanwhile, the singer Tablo and actress Kang Hye-jung got married last October, but already had a baby on the way. And former S.E.S. member Shoo and basketball player Im Hyo-sung tied the knot in April after announcing Shoo was pregnant. The couple even went on their honeymoon before they were wed.

“Of course no one can point the finger at a celebrity who gets pregnant before marriage. But the social atmosphere in which it is regarded as no big deal is worthy of notice,” said Lee Ji-hwan, 35, head of the Horeb Odaesan Youth Camp Center, a nonprofit organization that programs camps for schools. “And as more and more celebrities announce their premarital pregnancies in a frank manner, it gives teenagers the wrong idea that premarital pregnancy is not a big deal or even that not having a sexual relationship with your boyfriend or a girlfriend is cowardly.”

Kim Hee-seok, a missionary who leads a youth service at Cheongdam Presbyterian Church, would agree. He sees the phenomenon as potentially problematic for teens, whom he believes have not yet formed their own ideas about love and sex. To address the problem, he organized a sex education day for his students.

“About a month ago, one of the students came up to me and said that she could not understand why the church emphasizes the importance of keeping your virginity before marriage,” Kim said. “I believe celebrities are the role models for teenagers today. And naturally, they imitate their role models - both consciously and unconsciously. That’s where the problem starts. Teenagers are at the stage where it’s hard to have healthy ideas about what’s right or wrong. Therefore, the effect of celebrities’ frequent revelations of premarital pregnancy is absolute and fatal.”