The fast fashion invasion in downtown Myeong-dong has made headlines in recent months, especially since the arrival in late February of Swedish retailer chain H&M. Its entry meant Seoul now has a nearly complete lineup of the top overseas fast fashion brands.

The influx of such brands as Zara and Mango of Spain, Forever 21 of the United States and Uniqlo of Japan and their dazzling success are rapidly reshaping the country’s 27 trillion won ($24.2 billion) fashion retail market and local consumers’ apparel purchasing patterns.

On Monday evening, shoppers crowded the Swedish fashion chain H&M in Myeong-dong. They came from all economic brackets, with some carrying luxury handbags that must have cost several million won to those with obviously fake Louis Vuitton tucked under their arms, all browsing the four-story store spanning almost 30,000 square feet. Standing in the coiled line to check out took at least 10 minutes.

The shop attracts an average of 10,000 customers every weekday and 13,000 to 15,000 on Saturdays and Sundays, according to Cheong Hae-jin, public relations and marketing manager at H&M. Propped up by the brand’s immediate success in Seoul, the Stockholm-based chain announced less than a month after the launch of this store that it would open a second this fall only a few blocks away, and possibly more in other districts.

“We are now convinced that we can offer our Seoul customers added value through fashion and quality at the best price in connection with high design skills at another top downtown location,” said Hans Andersson, H&M’s country manager in Korea, in a statement earlier.

That same Monday night just three subway stops away, small apparel merchants sat in their booths at Good Morning City in Dongdaemun, for decades the center of the Korean-made clothing industry. 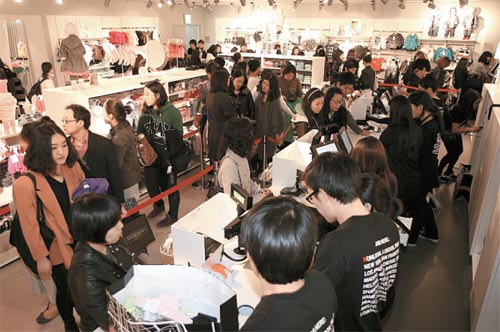 Up to 15,000 customers per day visit Swedish retailer H&M’s first store in Korea, located in the downtown shopping district of Myeong-dong. Provided by H&M Korea

About eight of every 10 aisles were deserted. Good Morning City is one of the immense shopping malls scattered across the district, which the Seoul Metropolitan Government still enthusiastically calls the “capital’s biggest fashion town.” Shopkeepers sat idling away the hours. When a customer finally wandered by, one blurted out, “Just take a look. It could never get any cheaper.”

The situation at apM, a building next door to Good Morning City, wasn’t much different. Any customers were Japanese or Chinese tourists, to whom the made-in-Korea label is much more valuable than it is to Koreans.

“Most of the shops here, including mine, sell domestically produced clothes,” said an owner of a female casual clothing store at Good Morning City.

“Look at these fabrics. They are extra-fine quality,” she continued, showing off a colorful flower-pattern dress made from a rayon-cotton blend.

“If you compare them with those made in China and some other mass-producing countries, you can clearly see the difference. But Korean customers keep saying we are expensive, and they don’t give a damn about the country of origin if prices are low,” she complained.

Another woman who runs a casual garments store in Dongdaemun said in frustration that stores in the building couldn’t possibly drag down prices any further, even though she is aware only additional discounts can give them a competitive edge against fast fashion brands. Korea-produced fabric is expensive, and discounts will leave no profit margin at all. 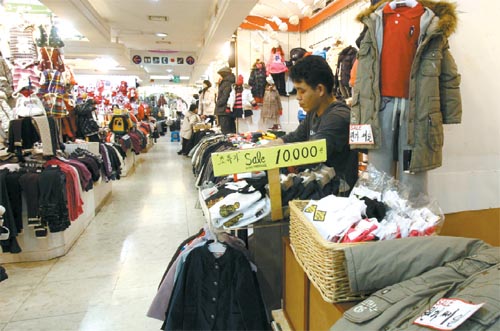 A shopkeeper in Dongdaemun stands behind a sale sign in a deserted aisle in Seoul’s oldest fashion district. Domestic consumers are increasingly leaving these clusters of domestic apparel retailers for trendier and cheaper fare offered by fast fashion brands. [JoongAng Ilbo]

What’s driven domestic customers away from the Dongdaemun shops they once frequented is a combination of style and cost.

“With that quality design plus that cost, fast fashion apparel has gained legitimate ground to make Dongdaemun ever more unattractive. Now I don’t really feel the need to visit the shopping district,” said In Hye-ran, a 29-year-old office worker.

She once occasionally shopped at Dongdaemun and used to buy Zara or H&M clothes through Internet-based overseas buying agencies. Those Internet agencies impose additional shipping and import charges of tens of thousands of won, but thanks to the arrival of brand stores that purchase the companies’ clothes directly, she can buy the same pieces on a smaller budget.

The price of a chiffon dress or skirt starts at roughly 30,000 won at Dongdaemun, but some cost more than 50,000 won. Price fluctuations are steep across different stores. By comparison, skirts in a similar style cost below 20,000 won at such fast fashion outlets as H&M, Forever 21 and Uniqlo.

As research into their business model has shown, the advantage of these fast fashion brands is their iron grip on the entire vertical process, from design to manufacture and distribution. They outsource the bulk of production to low-cost countries in Asia, or Morocco, Portugal or Turkey. The efficiency of this system and the strategy of keeping stock low and shifting it constantly enable the companies to keep costs down, meaning lower price tags for customers. The technique was pioneered by The Gap in the United States, and was later called SPA, for “speciality store/retailer of private-label apparel.”

Regular manufacturing and rapid replenishment of small batches of new products, added to cheaper prices, enable fast fashion brands to grab increasingly wider demographics. At H&M, for example, new items arrive once a day. The majority of traditional fashion retailers, on the other hand, place orders for seasonal collections months before those lines make an appearance in stores.

“Korean consumers have been quick to recognize the value of fast fashion - being able to buy the trendiest items at all times,” said Kim Hae-ryeon, chief executive of Interfashion Planning, a fashion consulting firm.

Kim Ji-yun, a 32-year-old flight attendant with a national carrier, is one of a large number of consumers who have changed their shopping habits with the dawn of fast fashion retail in recent years. She has begun purchasing items when they come into fashion and dumping them if they get outdated or if she gets tired of them. “I think it’s boring if you wear the same clothes again and again,” she said.

Kim describes herself a practicality-oriented buyer who makes regular business trips due to her job responsibilities and thus has many chances to look around fashion spots in various destinations.

“I used to buy from upscale brands at department stores, but now it feels like the clothes there are overly expensive in comparison to fast fashion brands. I only buy suits from department stores or luxury stores to wear for formal occasions, and those purchases happen only a few times a year.”

Even department stores acknowledge they must adapt to the burgeoning influence of SPA retailers. According to Lee Kyeong-su, assistant manager of public relations at Lotte Department Store, the combined sales of its female casual apparel shops in its main branch - just across the street from the H&M store - have dwindled, though he declined to give detailed figures. The main branch’s Young Plaza wing includes Mango, Zara and Uniqlo branches on three different floors. Lotte has 20 and 50 percent stakes in the local units of Zara and Uniqlo, which entered Korea in 2008 and 2005, respectively.

On a visit to Young Plaza last week, domestic young casual brands such as Soup, Le Shop, St. a and On & On, which shared the second floor with Zara, had up signs announcing discounts of 40 to 70 percent on a sizable portion of their lineups. Some had been up since April. Shopkeepers said the bargain bin products were leftovers from last season but would not specify when the sales would end. The price tags on dresses after the discounts were mostly 49,000 to 60,000 won - figures often found on dresses at Zara.

Lee, the PR manager at Lotte, would not confirm whether the discounts were directly linked to Zara’s high sales. But local casual fashion brands are adopting new strategies in the face of the ever-stronger popularity of fast fashion, he said.

“Instead of lowering price tags, domestic brands are moving to shorten the time it takes them to replace their products and come up with a smaller volume with a wider diversity. They are also placing reorders for those well received by customers,” he said. “Industry insiders say inventories will be visibly reduced by next year.”

For department stores in general, lost sales from fast fashion booths inside the large stores are offset by a larger influx of younger customers there to check out the latest Zara or Uniqlo items. More foot traffic means increased spending elsewhere in the building, in other stores and at the food court.

Some local fashion corporations have gone further, launching their own fast fashion brands to compete. E-Land Group last November launched SPAO, short for “specialty retailer of private-label apparel original.” It then opened a megastore with 2,880 square meters of floor space, right next to a Uniqlo store in Myeong-dong.

Next to try its hand at fast fashion was Fashion Group Hyungji, which opened late last month a gigantic female apparel store under its Crocodile brand in the posh Rodeo Street area in Apgujeong, southern Seoul. The fast fashion brand targets women in their 40s and 50s. The group’s Chairman Choi Byung-oh said in a recent media interview that he believes the expansion of fast fashion across the globe is not a crisis for domestic producers, but an “opportunity.”

“Local garment manufacturers will come under pressure to transform their existing production and sales practices to survive in the competition against overseas brands. It will eventually turn out to be a positive effect for everyone,” Choi said.

“With more reasonably priced fashion items coming in, those consumers who belong to higher purchasing power groups will be moving down to SPA in the longer term,” a spokeswoman with Cheil said.