It’s all in the numbers

It’s all in the numbers 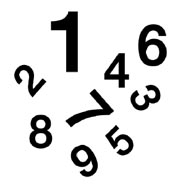 Arabic numbers carry special meaning to people across the world.

The number three is particularly significant with the Korean people. Since time immemorial, three has been considered a “perfect” figure signifying new life and revival. Our ancestors believed that the third day of the third month of the lunar calendar was particularly special, as it contains the number three twice. In the old days, Koreans thought that if they cut a baby’s hair on this day and then buried the clippings, the tot would grow a nice healthy mane in no time.

If you wanted a son, you prayed for one on this day as well.

The number three also symbolized sacred animals. Three-legged crows, which appear often on relics from the Goguryeo era, and three-legged dogs depicted in old tales serve as examples. Three is also present in the history of Korea’s funeral traditions. On the table for the angel of death sat three bowls of rice, three dried pollack and three pairs of straw shoes. And then of course there’s the tradition of observing a three-year mourning period or holding a three-day funeral.

In the Bible, the number signifies perfection and completion, too. Look no further than the Trinity, the three gifts the three Magi laid before Jesus, the three temptations, the three crosses at Calvary and the number of days from the death of Christ until his resurrection.

No one compares to the Chinese when it comes to adherence to lucky numbers. Their preference for the number eight is almost fanatical. When pronounced in Chinese, the number sounds similar to another term that means “making a lot of money.” It is said that the Chinese buy things tagged with prices that end in eight, even if it’s not a bargain. In 2003, the telephone number 8888-8888 was put up for auction in Sichuan Province. A bidder offered to pay $280,000.

King Carlos IV of Spain attempted to incorporate the number four into his daily life as much as possible. He dined four times a day. The meal consisted of four courses and was accompanied by four kinds of drinks. All his clothes were in four colors.

In Korea, numbers are playing a significant role once again among candidates campaigning for education superintendent in the June 2 elections.

Some of those running are using the numbers attached to their names on the ballot in their campaigns. The candidate in the first spot on the ballot is promoting “a one-round victory,” while the one in the second spot is urging voters to “vote on two this time.”

Putting education policy on the back burner, they are concentrating on publicizing the numbers that signify where they appear on the ballot to win votes.

I sincerely hope we will not have the same problem four years from now.