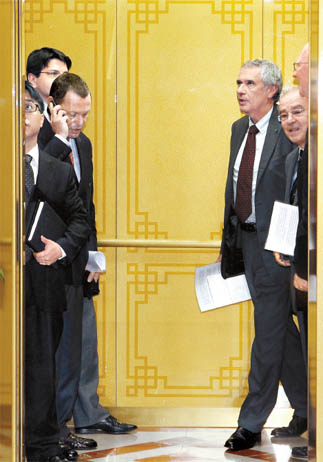 A serial number engraved on a metal fragment found at the site of the sunken Navy warship Cheonan has led an international team of experts to conclude that a North Korean torpedo attack was responsible for the sinking, South Korean government sources told the JoongAng Ilbo yesterday.

The serial number, comprised of numerals and one Korean letter, were extremely similar to engravings on a North Korean torpedo the South obtained seven years ago in western waters, they said.

The Ministry of National Defense is scheduled to announce the conclusion of the probe on the March 26 sinking of the Cheonan today, conducted by civil and military experts from Korea, the United States, Britain, Australia, Canada and Sweden.

Foreign Minister Yu Myung-hwan said yesterday that North Korea’s involvement was “obvious” as his ministry briefed envoys from foreign nations on the investigation of the incident, which killed 46 sailors and destroyed the 1,200-ton warship.

In his meeting with European diplomats and business leaders, Yu said “a strong underwater explosion generated by the detonation of a torpedo” sunk the ship. Asked by reporters whether he thought a North Korean attack was the cause, Yu said, “It’s obvious.”

According to the government sources, fragments of a torpedo propeller were recently collected from waters near the sinking site, including a substantial piece. The investigators found a serial number engraved on it. When compared to markings on the torpedo recovered seven years ago, they were found to be extremely similar.

“When we announce the outcome of the investigation of the Cheonan’s sinking, we will present clear physical evidence that no country, no one in the world can deny,” President Lee was quoted as telling Hatoyama. The Japanese leader promised his country will play an active role in implementing countermeasures.

The Blue House said Hatoyama telephoned Lee and the conversation took about 20 minutes.

On the eve of the announcement of the probe’s conclusions, security ministers and presidential secretaries attended a policy coordination meeting at the Blue House yesterday and fine-tuned the announcement to be released today.

The military also gave journalists a close look at the severed sections of the Cheonan’s hull. The salvaged ship was shielded from public view while the investigation was ongoing. Journalists were not allowed to take photos of the interior of the ship and they agreed to embargo the images until today.

According to the military, Defense Minister Kim Tae-young has ordered as much evidence as possible to be made public in order to strengthen the credibility of the probe.

The Foreign Ministry also called together yesterday ambassadors of about 30 countries, or their deputies, including permanent members of the United Nations Security Council, and updated them on the investigation. The ministry sought the nations’ help in South Korea’s future diplomatic efforts in response to the ship sinking.

While North Korea has denied responsibility, South Korea has said taking the matter to the UN Security Council would be among its options if North Korea is determined the culprit.

Ambassadors from China, Russia and Japan, members of the six-party negotiations to shut down the North’s nuclear weapons program, were briefed Tuesday. China and Russia are also permanent Security Council members.

To issue a binding resolution, unanimity in the Security Council is required. Permanent members have the right to veto, and because of their ties with North Korea, China and Russia are considered key players in any attempt to levy sanctions through Security Council resolutions.

The United States, the other permanent member of the Security Council, was not among the nations to be briefed.

But the U.S. government yesterday said it was ready to discuss raising the Cheonan issue at the UN Security Council with South Korea.

“We will be talking to South Korea about that issue, I would expect,” State Department spokesman Philip Crowley said.

Crowley said Secretary of State Hillary Clinton will visit Seoul next Wednesday. The Foreign Ministry said her meetings will focus on the Cheonan aftermath.