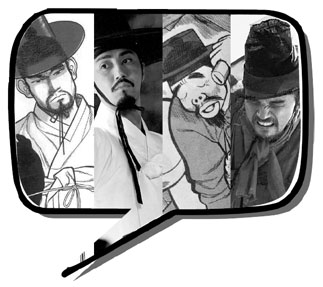 Over the years, Korean manhwa has served as the inspiration for numerous films, television dramas and musicals, many of which have gone on to critical and financial success. This provided a critical boost to an entertainment industry that was facing increased competition from foreign imports.

But the nation’s once-thriving manhwa industry - which encompasses comic books, graphic novels and animated cartoons - is in the midst of a crisis because of rampant illegal downloads and a shrinking market.

The latest film to borrow from manhwa is Lee Joon-ik’s “Blades of Blood,” based on the Korean comic of the same name. Meanwhile, Bong Joon-ho, of “Mother” (2009) and “The Host” (2006), is planning a film adaptation of the French comic book “Le Transperceneige.” Television drama series like “A Man Called God” (2010), “Boys Over Flowers” (2009) and “Masters of the Art of Study” (2009) all incorporate comic book story lines, as does the forthcoming drama “Buddy Buddy.”

But their success doesn’t necessarily guarantee that the manhwa on which they are based will be successful, too.

“If certain comics are made into films or TV dramas, sales of those comics rise. But it’s not the same for the entire manhwa industry,” said Shin Kyung-soon, secretary general of the Korea Cartoonists Association.

When Huh Young-man’s manhwa “Tazza” was made into the film “The War of Flowers” in September 2006, it attracted about 6.8 million moviegoers, and a year later, it was made into a TV drama series. Sales of the comic book itself, however, were lower than expected.

“When a comic is made into a film, it sells very well,” said Kim Jin-young at Random House Korea. “[Tazza] was even made into a drama. But for some reason its sales were lower than expected.”

She declined to share the sales figures for the comic.

Even successful manhwa artists find it is hard to make ends meet. Yang Jae-hyun is well known for his legendary manhwa series “The Ruler of the Land,” which started in 1994. Since then, 51 volumes have been printed and more than 4 million copies have been sold, which is rare in the Korean manhwa market.

“I have about three comic books published a year and each volume sells about 4,000 copies,” Yang wrote on his fan site in early March. “But I earn about 2 million won [$1,818] per month,” Yang wrote.

That may sound like a comfortable salary, but it’s not, Yang says.

“I also work with two or three assistants,” he wrote. “In addition to paying them, I have an electric bill of 300,000 won per month because we draw the comics with computers. After paying all of that, there is nothing left.”

Yang says that the nation’s comic book industry is on the brink of collapse, largely because so many comics are downloaded illegally from the Internet.

The widespread perception that comics can be downloaded from the Net for free via peer-to-peer sites has also contributed to the industry’s woes, said Shin of the KCA.

According to a 2006 report on the nation’s manhwa industry by the Korea Manhwa Contents Agency, the manhwa market was estimated at 32.2 billion won that year, which was a 9.5 percent decrease from the previous year.

The industry’s decline has led many comic book artists to stop publishing books. Instead they are transforming their work into Webtoons, or comic books serialized on the Web.

One of these artists is Yoon Tae-ho.

“The market outlook is dim, but manhwa artists are trying to survive in other ways such as with Webtoons,” said Shin of the KCA.

And there is hope that they can make the transition. Yoon’s Webtoon “The Moss” is scheduled to be made into a film by director Kang Woo-suk, who directed “Two Cops” (1993) and “Silmido” (2003).