Search for beauty clashes with harsh reality in ‘Poetry’

Search for beauty clashes with harsh reality in ‘Poetry’ 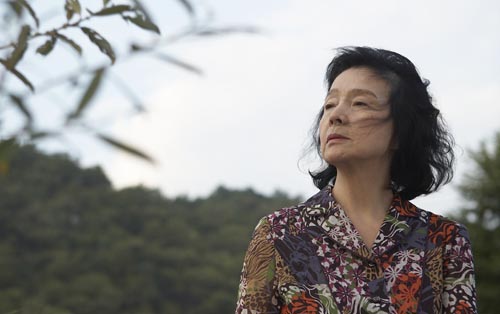 Sixty-six year old Mi-ja (played by Yoon Jung-hee) is a silly old dreamer. Clad in flower print chiffon, she waltzes around her small rural town with poetry on her mind.

Mi-ja is also a mother and grandmother, who supports herself and her grandson by working as a housemaid and personal nurse for a sick neighbor. One day, she decides to take a poetry class at her local culture center and begins her attempt to create something beautiful.

As things progress, we discover, sadly, that Mi-ja’s reality doesn’t quite match her dreams. Things start unraveling when she discovers that her teenage grandson took part in the repeated gang rape of a girl at his school who later committed suicide.

Like other characters from the director’s previous films, Mi-ja is confronted with guilt, a struggle for salvation and forgiveness, and a loss of innocence. As the universe offers up an unceasingly brutal slice of destiny, Mi-ja’s idea of poetry starts to look more like a vestige of the real thing.

In “Poetry,” director Lee Chang-dong takes us on this uncomfortable journey and dares to ask what might seem like irrelevant questions in the digital age: What drives us to read or write poetry? And what is the relationship between poetry and beauty?

The movie opens and closes with the image of a serene river on a peaceful, sunny day. As the water glitters with the afternoon sunlight, the body of the dead school girl edges up to the screen, floating with the calm pace of the river, at which point the Korean word for poetry appears on the screen in red calligraphy.

In this breathtakingly paradoxical opening image, Lee finds a lyrical way to convey metaphors for the whole story as he connects the obtrusive image of death to what seems to be just an ordinary day by the river.

Just like that river which flows calmly, indifferently towards tragedy, the people in Mi-ja’s life are callous towards the senseless death of the young girl. The parents of the students who gang raped the girl talk about collecting the settlement money as if they are conducting a regular bank transaction. When Mi-ja places a photo of the dead girl on the kitchen table for her grandson to see, the grandson glances at the photo for a mere second and then goes back to watching TV. It seems that Mi-ja is the only one to feel remorse about what happened.

In one scene, Mi-ja complains to her poetry teacher that writing poetry is too hard. Her teacher, poet Kim Yong-tek, says, “It is not poetry that is hard to write. It is hard to summon up the mentality to write poetry.”

Mi-ja in the end, writes a poem. As her voice recites the poem during the last scene, it overlaps and changes to that of the dead girl’s. With this, Mi-ja’s and the girl’s experiences mingle into a universal chain.

Although Mi-ja’s life doesn’t conjure beauty, it was Mi-ja’s longing for poetry that kept her dreaming. Perhaps the beauty in Poetry lies in Mi-ja’s search for it.