[Viewpoint] Is an ‘Oracle of Seoul’ possible?

[Viewpoint] Is an ‘Oracle of Seoul’ possible? 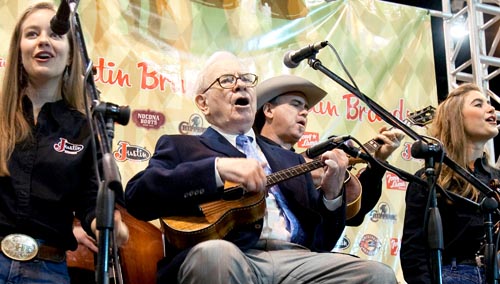 Warren Buffett, chairman of Berkshire Hathaway Inc., has a good time at his annual shareholders’ meeting in Omaha, Nebraska May this year. [YONHAP]

OMAHA, Nebraska ? The first Friday in May every year is a festive day in the Midwestern American city of Omaha, Nebraska. It is when Berkshire Hathaway - whose chairman and chief executive is Warren Buffett, the Oracle of Omaha - holds its annual shareholders’ meeting there.

I have been covering the event for seven years in a row since 2003, but little has changed. As always, the meeting was held at the convention center with 20,000 shareholders attending.

And as always, the five and half hour show began with a comic video featuring Warren Buffett, followed by a session with Charlie Munger, vice chairman and lifetime business partner of Buffett, answering questions from the shareholders. The only notable difference is the absence of Susan Buffett, Warren Buffett’s wife, who passed away in 2004.

Why do the American and international investors rave so much about Berkshire Hathaway’s annual shareholders meeting when it has been repeating the same old repertoire for years? The stock price explains everything that hundred of words fail to describe.

In 1962, Warren Buffett bought shares of a textile company called Berkshire Hathaway based in the small town of New Bedford, Massachusetts, for $8 per share.

Today, Berkshire Hathaway’s shares are sold for $117,700. In 48 years, the stock price has jumped to 14,712 times the original price that Buffett paid. During the same period, the Dow Jones industrial average grew by 16.6 times.

From childhood, Warren Buffett was good at numbers. Using his gift at mathematics, he grasped his own ways to decode the hidden messages in corporate accounts. When other investors were swayed by trends, he tenaciously rummaged in the accounts and searched for the pearls in the mud.

And he discovered the potential of Coca Cola, Gillette and Best Buy. Coca Cola used to be a stock that no investor paid much attention to, but after two decades, it became an international leader and made a great contribution to Buffett’s reputation as the god of investment.

However, questions remain. There must be many other people who are good with numbers in other countries, but an oracle like Buffett can only be found in the United States. His story reflects the growth and trends in the U.S. economy.

When Buffett acquired control of Berkshire Hathaway, the U.S. economy was reaching its post-war peak. Berkshire Hathaway’s wealth was boosted by the performance of Coca Cola in the 1980s, the era of Pax Americana. Corporate pension funds, which expanded as American companies advanced around the world, conducted a binge of stock purchases.

In the late 1980s, a retirement pension plan called 401(k) was introduced. A boom in stock and fund investments spread among salaried workers. Out of these circumstances an investment hero was born, Warren Buffett.

However, the world has now changed. The U.S. economy is growing too weak and old to produce another oracle like Buffett. Even General Motors, once one of the most powerful companies in the world, has filed for Chapter 11 bankruptcy.

Having an instinctive sense of money, Buffett now has his eye on the Asian market. At a press conference following the last shareholders’ meeting, he expressed special interest in Chinese and Japanese companies.

It won’t be an easy task, but why don’t we dream of having an Oracle of Seoul? For us to find pearls in the United States might be a daunting challenge, but it would be much more feasible to wage a battle in Asia.

Just in time, our domestic fund market has matured sufficiently, and a retirement pension system has been introduced as well. We have an investment environment that is just as good as the United States in the 1980s.

Can we dream of creating an oracle of Seoul about whom the world will rave 20 or 30 years later or would it be just a daydream?