Where nature rules, history and myth blur together

Where nature rules, history and myth blur together 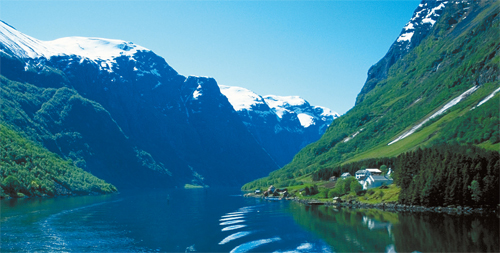 Naerøy Fjord stretches out in the wake from a cruise ship. Provided by Photo Visit Flam

BERGEN, Norway - Even in this modern world of quick, comfortable air travel, Norway is far away.

With no direct flight between Seoul and Oslo, the quickest route is a seat on Finnair from Seoul to Helsinki, then on from Helsinki to the Norwegian capital. Miss that, and prepare for almost a day in the air with a layover in Istanbul. To and from this far northern country, you’ll have time for three meals, an endless stream of movies and quite a bit of shut-eye. Even I, despite my love for plane trips and even airline meals, had to keep myself from pushing the call button to ask, “Are we there yet?”

It was to be a revealing trip for me. All I knew about Norway before going there were a few vague notions about smoked salmon and that it was the home of Stokke, my favorite push chair brand.

But the moment I landed in Bergen, Norway’s second-biggest city, I sighed. Landing in Bergen was like stepping into the world of fairies and dwarves. Hundreds of years of wooden architecture painted vivid reds, yellows and oranges line Bergen’s cobblestone streets. Bergen was once Norway’s capital, but today it’s home to just 25,000 people. Its main industry is tourism. Its location in the western part of the country makes it the gateway to Norway’s most impressive sight: the fjords.

But Norway isn’t just far away physically - it’s also culturally distant and internally detached, divided by the impassable gorges cut into its coast by the sea.

“Due to the fjords, it’s hard for people to travel to every nook and cranny of Norway. Since the fjords are so deep, it’s hard to build bridges,” said Sohn Yeo-young, a Korean who settled in Bergen 11 years ago with her British husband and works as a freelance designer and tour guide.

“In addition, Norwegians don’t want to destroy their natural environment by digging tunnels and installing asphalt paving. This makes it even harder for people like us [living in Norway] to travel around this nation,” Sohn added.

Indeed, the fjords are elusive and a trial to reach. 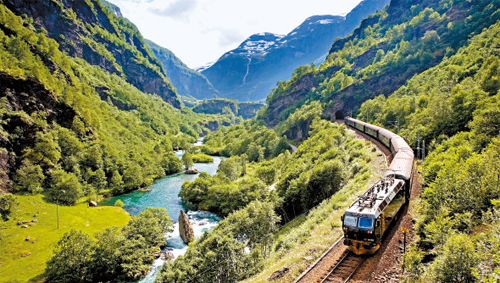 My journey to the fjords started from Oslo Central Station, not from Bergen, because I wanted to try “Norway in a Nutshell,” which is Norway’s most popular tour package. Feel free to start your journey from other cities such as Bergen.

The rail trip offers a unique view of the country. “You can see two different seasons by using this tour program around this time,” said Wenche Berger, a producer and marketing manager at Norwegian State Railway. During the four-hour, 42-minute ride from Oslo to Myrdal, the trip itself was dynamic and had many things to offer. Fluffy lambs resting near white and yellow flowers atop green grass suddenly give way to thick forest with branches reaching into the skies.

As the trip reaches its halfway point, it’s a good idea to pop some gum in your mouth - the tracks rise to 800 meters (2,600 feet) above sea level. By the time the train reached Finse, the highest train station in Norway at 1,222 meters above sea level, everything was covered in snow. We were above the treeline, so the woods were gone, and the sun beat down on the white snow, reflecting a pure, painful light.

It’s easy to see why George Lucas chose Finse as the location for the ice planet Hoth in “Star Wars: The Empire Strikes Back.” The empty, harsh landscape is enough to make any warm-blooded Earth mammal uneasy.

The train soon arrived at Myrdal, where we transferred to the Flamsbana Railway en route to Naerøy Fjord. About 60 minutes later, we came upon Flam, a tiny village whose name means “little place between steep mountains.”

At Flam, we hopped on a cruise ship for a trip up Naerøy fjord, a branch of Songne fjord, the largest of its kind in Norway, which was listed as a Unesco World Heritage Site in 2005. Standing on the deck, all I could hear was the sound of rushing saltwater as the cruise ship cut through the narrow channel - along with, of course, the clicking of camera shutters. Clear and clean, the water offered a perfect reflection of the cliffs and forests that surrounded us, and even the clouds above. 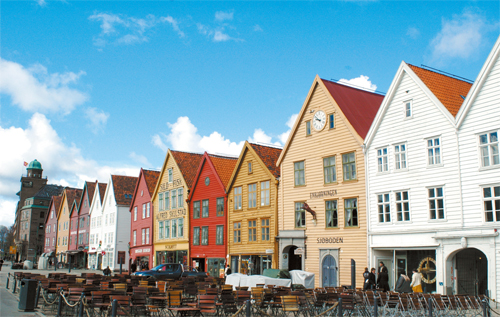 Bergen’s main attraction, the Bryggen wharf district, was built by the Hanseatic League in 1360. By Sung So-young

The two-hour cruise took us to Gudvangen, located in inner Naerøy fjord. Since I decided to stay the night there, I headed to the Stalheim Hotel, which opened in 1885 and has been run by the same family ever since.

As soon as I entered room 328, I fell in love. The cozy room overlooked the Naerøy valley. It was a view that literally took my breath away - apparently it was this panorama that kept German Emperor Wilhelm II coming back to the Stalheim time after time.

“After his first visit in 1886, when this hotel was actually an inn, he visited 20 times,” said Trygve Dugstad, an assistant manager at the hotel. When Dugstad first started working here back in 1982, he was a gangly young man who came for the vistas. Today his hair is speckled in gray, but he said he still can’t get enough of the scenery.

Another great attraction at the Stalheim is its folk village, which is open exclusively to hotel guests (tours are provided). Located right next to the hotel, it’s a small town of 25 old Norwegian houses, dating back to as early as 1650. The owner of the hotel, Kaare Tonneberg, established the village. He loved collecting everyday antiques such as hope chests, utensils, traditional clothes and even jars and grandfather clocks. Eventually he needed a place to put his collection, and began moving actual houses, capped with traditional green rooftops, to his property.

Norway has a tumultuous history of royal intrigue and splintered unions with its neighbors. Until 1814, it was unified with Denmark. In that year it was ceded to Sweden, but instead Norway declared independence, and today citizens celebrate that day, May 17.

Because of the country’s long history and harsh weather, a chance to experience the old ways of life are rare, but the Stalheim Folk Museum is a worthy place to start, especially early in the morning with crisp, fresh air drifting off the fjord.

After a night at the hotel, I headed to Vik, a tiny, beautiful village located in the southern part of Songne fjord.

In order to get to Vik, a bus drives up a winding road to Mount Vikafjellet, which offers a look at Vik and part of Songne fjord from above.

After Vik, we headed to Belestrand, a small typical Norwegian town, with a couple of stave churches dating back to the Middle Ages and even older tombs from Viking times, so leave yourself an hour to walk around the town.

With my lungs cleansed by the clean air and my appetite for raw nature more than sated, it was time to head back to Bergen for a reminder of the virtues of urban living - and a shopping spree. It’s appropriate because for centuries Bergen’s most important landmark has been its wharf district, Bryggen, where fishmongers would sell and trade their bounty. Built by the Hanseatic League in 1360, German merchants used these old wooden buildings to stock cod for almost 400 years. Today, the buildings are used by many artisans. But in the narrow back alleys of Bryggen, the smell of dried cod still hangs in the air.

Another must-see spot in Bergen is Mount Floyen, accessible via the Floibanen funicular railway. I found myself wanting to stay there for hours or even days. The air is so clear, individual buildings and even houses - though they appear no bigger than ants - can be discerned in the city below.

My trip was coming to a close. The Norwegians I met during my seven-day journey all beamed with pride at one aspect of their home: its natural beauty. I couldn’t possibly blame them, but I would add the country’s careful preservation of its charming old architecture to that list as well.

This is a nation that knows the value of its history. Debates have raged for years over whether to build a new opera house in Oslo, and whether to replace the centuries-old cobblestones on Bergen’s streets. Norwegians’ determination not to build bridges or pave over their majestic cliffs for human convenience is simply more evidence that here, the people really do believe their tourism slogan: that Norway is “powered by nature.”

General information about this country

* Norway in a Nutshell: www.norwaynutshell.com/en

* Weather in May: Average day temperatures are between 7 and 10 degrees Celsius (45 to 50 Fahrenheit), but a light jacket is a must because of changing weather. On May 11 when I left Bergen, it was snowing and hailing.

* What to buy: Norwegian knitwear, bottles of Omega 3 and windbreakers.

* Language: The official language is Norwegian but most people speak English.

* Hours: Most museums and galleries close around 4 or 5 p.m.

* Peak tourism season: from May to September