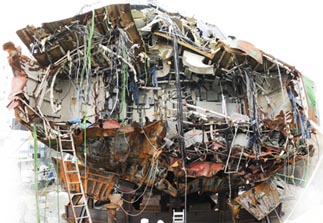 The ministry said a team of South Korean, American, Australian, Canadian and British intelligence authorities concluded that a small North Korean submarine was responsible for firing the torpedo at the patrol-combat corvette on March 26.

The underwater explosion, only 6 to 9 meters (20-30 feet) below the ship, caused a bubble jet whose shock waves tore the Cheonan in two and sent it to the bottom.

“A North Korean-manufactured torpedo that carried a 250-kologram [551-pound] warhead is confirmed to be responsible for the explosion,” the ministry said.

The decisive evidence was torpedo fragments collected from the sinking site. The propeller of the torpedo was recently recovered and a North Korean marking was on it, the ministry said. The marking read “1 Beon” using the Arabic numeral and the Korean letter that means number.

The recovered components were identical to the designs of a North Korean sonar-tracking torpedo depicted on an arms export catalog of the communist regime.

The experts also based their conclusion on analysis of evidence collected from the site of the sinking, the hull of the salvaged ship, postmortem
examinations of the dead sailors, seismic waves, simulation of underwater explosions and currents near the sinking site, the ministry said.

North Korea has denied involvement in the sinking as recently as this week, when its vice parliamentary speaker Yang Hyong Sop criticized Seoul for "unreasonably" linking Pyongyang to the sinking, according to Pyongyang's state radio station.

But “There is no other plausible explanation” than that the North was behind the disaster, the joint civilian and military investigation report said.
South Korean President Lee Myung-bak has vowed stern action against the culprits and discussed the matter by phone with President Barack Obama and
Japanese Prime Minister Yukio Hatoyama.

The top U.S. diplomat for Asia, Kurt Campbell, said yesterday that the "United States strongly supports [the report’s] conclusions." Campbell, assistant secretary of state for East Asia and the Pacific, said the findings meant the U.S. and its allies will be facing "a very serious set of circumstances in the coming days."

The U.S. response will be a central issue during Secretary of State Hillary Rodham Clinton's upcoming trip to Asia, Campbell said. Clinton leaves Washington today for talks in Japan, China and South Korea.

"The United States supports South Korea unequivocally and strongly," Campbell said, adding that Clinton would be consulting closely with China, Japan and South Korea on how to answer the attack.

Analysts predict the U.S. and South Korea will step up their anti-submarine activities while Seoul may on its own bar North Korean vessels from its waters. The South may also deliver a powerful economic blow by cutting of imports of North Korean commodities, particularly fish products, that would badly hurt the North's desperate economy.

But looming over the discussions is concern that a harsh reaction could escalate tensions to the point of clashes. There is also concern an aggressive response could trigger the collapse of what is arguably the world's most isolated and authoritarian regime, U.S. officials said.

The Pentagon and American intelligence agencies fear the situation could develop into one in which Kim Jong il's government, already under heavy economic strain, loses control, the officials said, on condition of anonymity.

Material from the Associated Press and Reuters was used in this report.