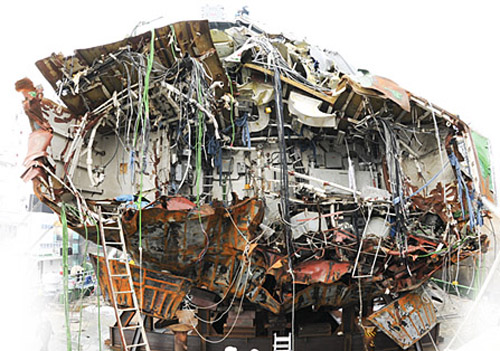 Photos show the severed sections of the Cheonan’s hull. Provided by the Joint Press Corps

South Korea’s allies yesterday rallied around Seoul in condemning North Korea, as the South tried to leverage diplomatic support to fashion a response against Pyongyang.

The White House said in a statement that the North had engaged in “unacceptable behavior” that deepens the country’s isolation in the world.

“This act of aggression is one more instance of North Korea’s unacceptable behavior and defiance of international law,” the White House said.

“This attack constitutes a challenge to international peace and security and is a violation of the [1953] Armistice Agreement. The report issued today by the team of international investigators reflects an objective and scientific review of the evidence,” it said. 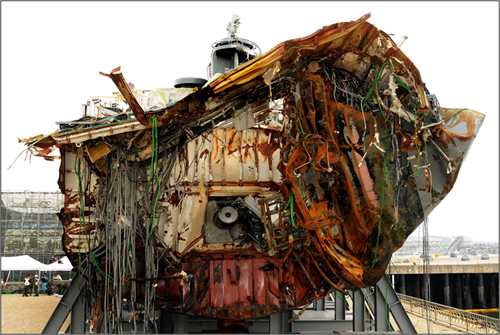 Photos show the severed sections of the Cheonan’s hull. Provided by the Joint Press Corps

Australia and Britain, which sent experts to join the Cheonan probe, also criticized North Korea for its “deplorable” action. UN Secretary-General Ban Ki-moon said through his press office that the reports on the findings of the probe were “deeply troubling.”

China, North Korea’s closest ally, yesterday called for “calm and restraint” after the probe’s results were announced. Foreign Ministry spokesman Ma Zhaoxu was quoted by AFP as saying, “All parties should stay calm and exercise restraint. We stand for safeguarding regional peace and stability, promoting the six-party talks and the denuclearization of the Korean peninsula.”

Ma also said China would make its own “assessment” of the probe results, although he said that didn’t mean Beijing would conduct an independent investigation.

South Korea has been trying to persuade China, one of five veto-wielding permanent members of the United Nations Security Council, to go further. Raising the Cheonan issue at the Security Council is one of the South’s best response options, but a binding resolution that would include sanctions requires a unanimous Security Council vote.

Prior to yesterday, China had acknowledged the investigation conducted by international experts but maintained a wait-and-see approach.

The Foreign Ministry in Seoul yesterday said the government was mulling various countermeasures but has yet to settle on specific steps.

“Our options include bilateral actions involving the United States, or multilateral steps with the United Nations or other international agencies,” said ministry spokesman Kim Young-sun, without elaborating. “I believe we need to have further consultations with related parties in and outside Korea. This may take some time.”

Kim also said China wouldn’t be any different from other countries.

“Our government did its utmost to conduct an impartial and scientific investigation,” he said. “And I expect the Chinese government to closely examine the results of such investigations and to take appropriate measures accordingly. Every government, including China, would understand the gravity of the Cheonan sinking.”

The Unification Ministry, which oversees inter-Korean affairs, discussed its options. So far this month, the ministry has already taken measures to suspend inter-Korean budgets and has said it would consider reducing imports from North Korea.

The South may also prevent North Korean vessels from traveling through the Jeju Strait off the south coast of the peninsula. The North can currently use the strait, part of South Korea’s territorial waters, under an inter-Korean agreement that took effect in 2005.

Military options appear limited for South Korea because the U.S. Combined Forces Command reserves the right to deter war on the peninsula under the Combined Delegated Authority. Instead, the two nations’ armed forces could have a large, combined anti-submarine exercise later this year.