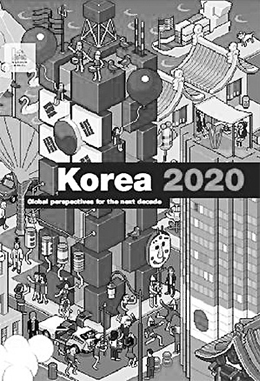 Korea has bounced back quickly from what has been termed the Great Recession, setting the pace for economic recovery in Asia. The result is a renewed sense of national self-confidence that had been dented by the 1997 Asian financial crisis. Korea is enjoying its “Kim Yu-na” moment of standing tall among its peers as it prepares to play host to the G-20 summit in Seoul in November.

But some observers believe that Korea’s good fortune may not last, even as the rise of Asia in the global economic pecking order should be benefiting it.

The worry is that Korea will once again be relegated soon to playing its traditional role of being the shrimp squeezed between the whales of bigger regional economic powers, such as China and India. Korea’s industrial export model is under threat by weakening demand in the United States and Europe, while its domestic market is not big enough to take up the slack. The population is rapidly aging. The strong sense of national unity that powered Korea’s rapid growth from the ashes of the 1950-53 Korean War is being strained by antagonistic divides between left and right and old and young.

It is this challenging environment that is examined in “Korea 2020: Global Perspectives for the Next Decade.” The handsomely packaged coffee table-style publication contains 28 essays by global “thought leaders” who were asked by the consulting group McKinsey & Company to outline possible strategies for Korea as part of an international advisory council assisting President Lee Myung-bak.

Their assessment of Korea is rather sobering. They recommend that Korea must quickly shift away from its dependence on manufacturing and place a greater emphasis on high-value services and products, such as financial services and environmental technology. But that could prove difficult unless Korea overhauls its education system, with its overemphasis on standardized university entrance exams, to help workers think more creatively. Other weaknesses include the rigidity of labor markets and low worker productivity, excessive bureaucratic red tape, high domestic dissatisfaction with government and political leaders, and a rigid social hierarchy that slows down change.

But some of the writers believe that Korea, as a middling political power, is in a unique position to play an important mediation role in Asia in the same way that the Nordic region has done in Europe and on the international stage over the past century. The selection of Ban Ki-moon as UN secretary-general may be a harbinger of things to come. Korea enjoys good ties with both East and West. Its popular appeal in Asia has been reflected in the K-pop wave of the last few years, complementing its strength as an economic model for emerging countries. But Korea will not be able to fully exploit this advantage until it sheds what many essayists in the book regard as its insular mind-set. One way to do so is that Korea must be more welcoming to foreign workers and international creative talent.

The book’s main “message that comes through loud and clear is that time is quickly running out for South Korea to identify and implement effective solutions to the problems the country faces,” writes Dominic Barton, the managing director of McKinsey and a former head of its Seoul office, in his introduction to the volume.

That may be true, but one of the weaknesses of the book (in addition to the repetitiveness of many of the essays and the fact that a few already appear to be dated) is that Korea is examined in a vacuum, without placing it in a wider context. The rest of Northeast Asia, together with Singapore, faces many of the same challenges. While Korea is threatened with an aging population, so are Japan and China. Insular attitudes are not confined to Korea alone in the region. In some respects, Korea is in a stronger position than its neighbors. Much of its business and government elite have received advanced university degrees from abroad, promoting a cosmopolitan view on the top at least.

In spite of a domestic debate about the growing gap between rich and poor, Korea remains one of the most egalitarian societies in Asia, after Japan, in terms of household income. Contrast that with the situation in China, where wide income disparity represents a threat to political stability.

One should not underestimate Korea’s ability to transform itself despite what are frequently seen as firmly embedded conservative values. One example is the rapidity with which Korea recently has corrected the world’s most severe imbalance between the birth of boys and girls, after decades in which mothers were forced to abort female fetuses due to the social preference for boys.

If the 21st century is supposed to be the Asian century, then Korea still looks set to remain at the forefront.

This is not to underestimate the difficulties of the changes that Korea must undertake. A move toward a bigger service economy and efforts to boost domestic demand to counter a possible slowdown in export growth will not be easy when household debt is extremely high and there will be fewer workers to man the labor-intensive service sector.

The biggest uncertainty hovering over South Korea is a possible collapse of North Korea, a subject that for some unfathomable reason is not even discussed in “Korea 2020.” Such an omission is puzzling since such an event would render much of the analysis contained in the volume obsolete given the enormous social, economic and diplomatic consequences that would flow from the North’s implosion. Perhaps McKinsey or the authors believe this event will not happen in the next decade, the book’s stated time frame. But given the increasingly erratic nature of the North’s recent behavior, ranging from a misjudged currency reform to the torpedo attack on the Cheonan, I wouldn’t bet on it.

Korea 2020: Global Perspectives for the Next Decade