Shake, rattle and roll on over to the Elvis hall in Paju

Shake, rattle and roll on over to the Elvis hall in Paju 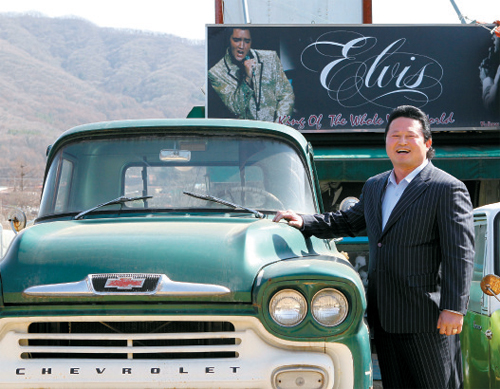 Lee Jong-jin, who founded The Elvis Presley Memorial Hall in Paju, Gyeonggi, stands next to his Chevrolet Apache, which is the same model that Elvis Presley had. By Choi Jeong-dong

When Elvis Presley recorded his first single “Heartbreak Hotel” in 1956, he transformed the face of rock music and inspired generations of artists and fans.

There are Elvis impersonators still haunting Vegas lounges, sightings of the real Elvis are still reported and velvet Elvis paintings still hold coveted spaces on living room walls in cities far removed from his beloved Graceland, to which thousands of fans still flock from all over the globe.

Fans of Elvis in Korea have something slightly smaller than Graceland, but no less revered, in the form of The Elvis Presley Memorial Hall, which was opened by an ardent Elvis fan 10 years ago in Paju, Gyeonggi.

Lee Jong-jin, the president of an Elvis fan club here, sold two of his apartments to establish the hall and he spends 30 to 40 million won ($26,019 to $34,692) on events. Incredibly, he has never had to borrow money to keep it open. 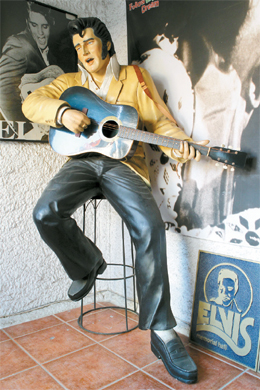 One of the wax figures of Presley in the hall, which also contains records and other memorabilia related to The King.

Since he is the only one running the hall, and he has a full-time job at a printing company during the week, the hall is open only on weekends.

Inside, there is a two-hour DVD about Elvis that includes footage of a performance he did at a summer festival in Las Vegas in August 1970 and clips from his 25th anniversary tour of Europe. In the clips, Elvis is in his prime, hips swinging and legs shaking.

Lee got addicted to Elvis when he was young, and for him, the museum is a serious business.

“I built the museum as a tribute, and I didn’t want it to be a tourist spot. I don’t even sell coffee or alcohol because if there were distractions, the significance of the memorial hall would fade,” Lee said. “Fans from the U.S. or Japan have visited and cried, saying that they’ve never seen a place like it.”

In addition, Lee owns six cars relevant to Presley, including a Cadillac Eldorado, which was part of Presley’s funeral cortege. In the future, Lee plans to look for a larger place that will allow him to exhibit the cars, too.

Lee said he disagrees with people who say that Elvis only became a star because so many girls swooned over his dance moves.

“There was popular music before Elvis. But it was dependent upon who was listening, whether the listener was male or female, rich or poor,” he said. “Elvis’s songs were for everyone.”

Lee also spoke highly of Elvis’s modesty, giving an example of an interview he did in the past. When Elvis was 21 years old, a reporter asked how Elvis could get his audiences so excited and where his ability to entertain came from, Lee said. Elvis answered that anyone could do it, not just him, and that he was just chosen by God before others were, Lee said.

“He was saying we all could’ve done it,” Lee said.

Elvis’ influence on the musicians who followed him was immeasurable in Lee’s eyes.

“The music that came after Elvis is just a remake of Elvis’ songs. I’m not denigrating the artists who followed him, but for me, that’s just a fact,” Lee said. “The Beatles, The Rolling Stones, even Bob Dylan, became singers because of Elvis. And Bob Dylan once said that when he dies, he will be going to meet Elvis.

“Whether we know Elvis or not, like him or dislike him, we are living in his culture.”

Lee only offers food at the hall twice a year, on Jan. 8, when Elvis was born, and on Aug. 16, which is the date of his death.

“Elvis continues to make us happy even after his death, so I do offer beer and soju just on those days,” Lee said. “Elvis once said that happiness is one’s pocket, meaning that miracles are all around us and that they happen in the little moments. Rock ‘n’ roll is like that. It’s simple and clear.”

For more information on The Elvis Presley Memorial Hall, go to www.elvishall.com.