Law school dean has faith in his work

Law school dean has faith in his work 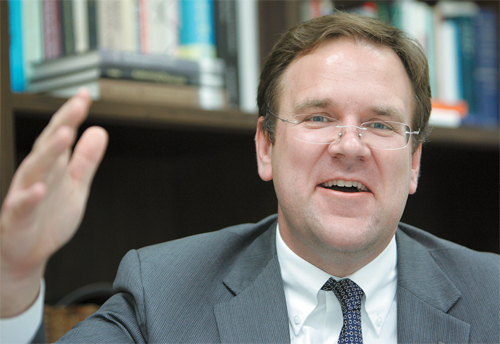 Although Handong International Law School in Pohang, North Gyeongsang, has a short history, it has made great strides toward educating Korean students in U.S. law and helping them to secure jobs overseas.

The school was established in 2002 by Handong Global University with the goal of providing an American-style law school curriculum and nurturing prospective attorneys who will practice in the United States.

Since then, of the 199 students who have graduated from Handong so far, 105 of them have passed bar exams in the United States.

In an interview with Eric Enlow, the dean of Handong International Law School, Enlow said that Handong is making remarkable progress, especially considering that an average of only 32 percent of bar exam applicants who were educated in countries other than the United States pass the U.S. bar exam.

“Fifty-three percent of our graduates have passed bar exams in seven U.S. states including Tennessee and Missouri,” Enlow said. “This is the first time that a Korean law school has produced more than 100 students who passed U.S. bar exams.”

Handong is the only university in Korea that offers and meets the academic requirements set forth by the American Bar Association, which accredits U.S. law schools.

“Those who have obtained a legal license to practice in the U.S. take jobs in various fields that would not usually be open to an attorney who passed the Korean bar exam,” Enlow said. “We have graduates working at the top five law firms in the U.S., such as Paul Hastings. And between 50 and 60 Handong graduates now work at eight law firms in Korea.”

While there are graduates who work in the legal departments of Korean companies, there are others who serve as legal advisers or attorneys at NGOs working on human rights issues, Enlow added.

Some graduates also get well-paying jobs without obtaining licenses in the United States, Enlow added.

Although Handong is located in the city of Pohang, which is outside of Seoul, Enlow explained the school is quite international. Over 20 percent of Handong International Law School students are foreigners and most of them are scholarship students from developing countries, he said.

“Three graduates work at Vietnamese law firms and a Jordanian graduate works as a United Nations High Commissioner,” he said.

All Handong classes are conducted in English and all put a heavy emphasis on in-class discussions, Enlow said.

When asked whether he has any regrets about taking a position that pays him less than he would make as an attorney in the United States, Enlow, a Yale alumnus, said his income has changed drastically but that he had found meaningful work here based on his Christian faith.

Most of the school’s 12 faculty members are members of the Christian Legal Society and many consider teaching here as volunteer work.

“My wife and four children live here with me and my wife educates my children at home,” Enlow. “I’m satisfied with life here and I want to continue working here.”