[Viewpoint] Our crisis has only just begun

[Viewpoint] Our crisis has only just begun 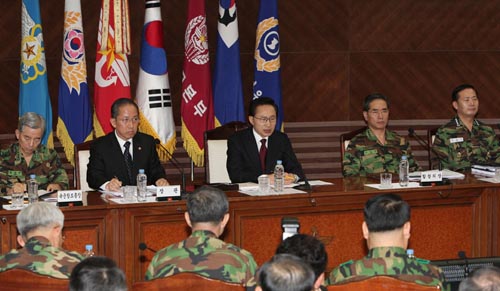 It’s now been 60 years since North Korea invaded South Korea and started a war. The biggest post-war military attack since then occurred in our waters two months ago with the sinking of a 1,200-ton naval ship, which took the lives of 46 young sailors.

A joint investigation team of civilian, military and foreign experts has concluded that the Navy corvette Cheonan was sunk by a torpedo attack by the North Korean military, presenting an array of forensic, scientific and material evidence.

Now that everything is clear, we must calmly muster wisdom and strategy from home and abroad in responding to the unprecedented situation.

Our security now faces its biggest challenge since the war. The Cheonan sinking is more than an act of terrorism, it is an act of military aggression that goes against international law. North Korea has been intensifying its military provocations, triggering deadly skirmishes in 1999, 2002 and 2009, as well as a major blowup this year.

Despite the summits between the two Koreas, the North has continued its provocations and conducted two underground nuclear tests. That shows the two faces of North Korea’s strategy toward the South as well as how perilous and erratic a paranoid garrison state can be at risk management.

North Korean leaders may not have expected South Korea and the international community to work so quickly and in such close cooperation to assemble a joint investigation team and marshal a united condemnation of the North’s actions. They have long believed South Korea to be weak and have gained confidence in manipulating their South Korean counterparts through years of engagement policy.

But they may have come to the rude awakening that the world has changed. Its fitful behavior of late - the shortened trip to Beijing by Kim Jong-il, confiscation of South Korean assets at the Mount Kumgang resort, and the sudden event of the national party congress - all suggest its confusion and inability to adapt to the changes in the outside world.

North Korea may be feeling proud over its accomplishment with the Cheonan sinking because the attack may have helped to boost the morale of the military and set the stage for the next succession of power to heir-in-waiting Kim Jong-un.

Before he ascended to power in 1976, Kim Jong-il orchestrated the axe murder of American soldiers in the Korean demilitarized zone.

The cult of worship around its dictator has led the North Korean leadership to opt for a “madman strategy,” hoping that by dancing on the ledge it will gain rewards from the international community.

We are coming to grips with the reality of living at a standoff with such an erratic state for 60 years. At this point, however, we should establish several principles with which to defend our livelihood and land. Last year in his Memorial Day address, President Lee Myung-bak said we cannot compromise on security.

Therefore, we should make North Korea pay thoroughly for the consequences of its actions and make it see that it will be risking a lot more if it continues its provocations. To do that, we must draw up a meticulous strategy that takes into account different methods and stages.

North Korea needs to realize that it will have no one on its side if it keeps up its current policy. Now that its crime has been made official, North Korea will learn whose side time is on.

Beijing still remains ambiguous, but we should use the strong alliance with the United States and security diplomacy with China to cut through the special relationship between China and North Korea.

Most importantly, we should look at whether or not we have a strong understanding of our risk and whether we, blinded by our economic edge, have underestimated North Korea in its ability to sustain itself, both economically and militarily.

To build an extensive and sound consensus on our capacity for risk management, we should learn from our own mistakes. We must not forget that our crisis has only just begun.

*Translation by the JoongAng Daily staff.
The writer is the ambassador on International Security Affairs.