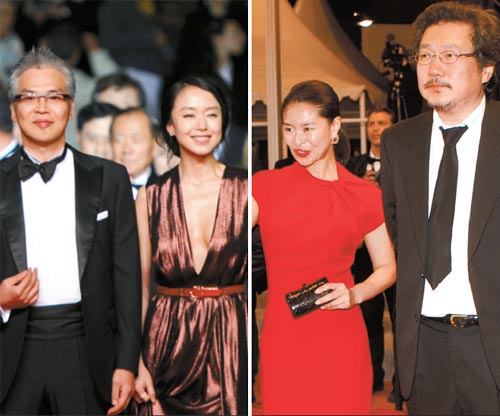 Right: Actress Ye Ji-won in a Chinese Qi Pao-inspired red dress, left, and director Hong Sang-soo arrive for the screening of “Ha Ha Ha” at the 63rd Cannes Film Festival on Friday in Cannes. The film on Saturday won the top prize at the Cannes film festival sidebar competition, Un Certain Regard. [AFP/YONHAP]
Left: Director Im Sang-soo, left, and Jeon Do-yeon pose on the red carpet on May 14 for the screening of the film “The Housemaid” in competition during the 63rd Cannes Film Festival in France. She wears a bronze-colored dress from Salvatore Ferragamo’s 2010 F/W Collection, which was brought directly from Milan before the seasonal collection’s official launch. [AP/YONHAP]


At Cannes, the buzz on likely winners of the festival’s top prize Sunday is keeping fashionistas and filmmakers alike awake at nights, as brands and movies fight for red carpet limelight.

A city studded with high-end jewelers and designer boutiques, sun-kissed Cannes transforms into the world’s capital of luxury once a year when the 12-day festival comes around.

The prime time for Gucci, Pucci, Armani and the rest will be the gala close Sunday when paparazzi and TV networks from across the globe flash celebs sashaying up the red carpet’s 24 steps for the Palme d’Or awards finale.

“The red carpet has become a catwalk show,” said Francois Ortarix, spokesman for Swarovski, the Austrian crystal makers of cutting-edge jewelry and other accessories.

The firm this year did “Desperate Housewife” Eva Longoria an 11th-hour favor when she called 15 minutes before stepping up the carpet to say her free 500 euro ($630) gift Swarovski clutch-bag was a little oversize and didn’t match her dress.

Ortarix literally ran to her swish hotel suite with a smaller pouch in a different shade. “She even offered to return the other one,” he said.

Like other designer labels, Swarovski flies into the festival each year, setting up a showroom in one of the city’s swankiest hotels where movie stars and celebs are offered jewels and accessories on loan.

“People the world over watch the red carpet for new styles. It makes our customers dream they too can be as stunning as the stars,” he said.

In a showroom nearby looking over the Mediterranean, Lebanese couture supremo Elie Saab has flown in 100-odd evening gowns worth anywhere from 3,000 to 30,000 euros - also lent for the night for free, but only to celebs.

“Our problem this year is there are more male than female stars but we don’t do suits,” said spokeswoman Emilie Legendre.

Once loaned, the gowns can never hit the red carpet again.

A recent documentary titled “Red Carpet” said members of last year’s Cannes jury that names the winners of the festival awards were paid 90,000 euros each to wear an Armani creation for the opening ceremony.

At the Oscars, said the movie’s director Olivier Nicklaus, fashion houses lavish sums of up to 250,000 dollars to get a dress in the spotlight.

But Elie Saab’s Legendre said their fashion house did not hand over cash.

“We don’t have muses, we don’t pay. People call, or their agents, asking for a gown. Sometimes the requests are made in Los Angeles, way before Cannes, sometimes it’s a last-minute affair.”

The label brings a seamstress for the duration of the film fest and when necessary finds a hairdresser, jeweler, shoes or bags.

With premieres, parties, photo-calls and cocktails, luxury labels are busy throughout the 12-day festival, the movie world’s biggest annual event.

Chopard, the legendary Swiss luxury goods firm, hired the rooftop terrace of the Martinez hotel, where suites can cost tens of thousands of euros a night, for the duration of the festival. There it hosts soirees where champagne flows and stars wander in and out.

At a mega-party for its 150th anniversary, Lionel Richie flew in to perform for A-listers such as Paris Hilton, Marion Cotillard, Meg Ryan and Naomi Campbell.

Chivas whisky, one of 40-odd partners of the festival, treats its best customers to a day in Cannes, including wining, dining, late night partying and a red carpet premiere.

So as the Cannes finale looms, the battle has begun to dress the stars.

“We don’t know yet though the rumor-mill is beginning to buzz,” said Legendre. “In the meantime we’re on call here every day from 4 p.m. to midnight in case a star needs a dress.”