Bursts of color reforming schools, outside and in

Bursts of color reforming schools, outside and in 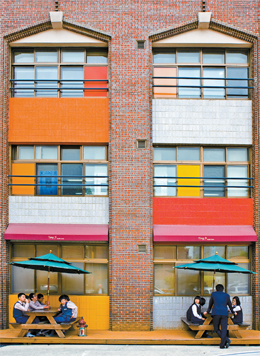 Two years ago, the government launched a project to improve school buildings around the country, and the changes that have been implemented have changed not only the appearance of the schools but also the lives of their students.

For most students, a school is a place of learning, a place for recreation and, at times, it can even feel like a prison. Rarely could it be characterized as a home, and in fact the majority of schools in Korea have buildings with oppressive structures and somber colors. But three schools that are part of a new program to improve school buildings launched by the Culture Ministry in 2008 are changing their approach to school decor, which has had the unexpected result of improving the lives of the students by providing attractive spaces that facilitate learning and promote creativity. In each case, the superficial changes implemented at the schools have had a positive effect on student behavior, creating more considerate students while also decreasing vandalism.

At Yangji Middle School in Jeonju, which opened in 1993, one of the most noticeable changes that occurred as a result of its participation in the school improvement project was the fresh explosion of color that now blooms over the exterior of the school. Walls are painted in bright shades of red, orange and yellow, giving it a warm and welcoming atmosphere.

Inside the building, fluorescent lamps were replaced by LED (light-emitting diode) apparatuses. The pillars are decorated with multicolored tiles and the walls are painted in cheerful colors that differentiate the floors.

The cosmetic changes have done more than improve the school’s looks, they have also helped to change students’ attitudes.

“When I first came to this school, I was surprised to see some of the students doing aggressive things, such as carving or scribbling on desks,” Han Hyo-su, the deputy principal of Yangji Middle School, said. “However, with the positive change in the school’s environment, I now see that students have also changed for the better.” 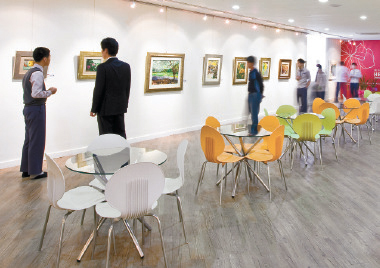 A group of fifth-graders at Jungang Elementary School in Jeonju learn from a teacher how to play the danso in a special room decorated with hanji (traditional Korean paper).

In addition, some of the school’s unused classrooms were refurbished as places for cultural activities. For instance, a classroom on the first floor of the building now serves as a gallery where both students and local artists display their works. It has now become a sort of community culture center with frequent exhibitions and lectures for area residents, breathing new life into this nearly 20-year-old school.

Another classroom on the third floor has changed into a board game room, which is currently the most popular spot in the school. During the lunch hour, the room always bustles with students.

“There are many times when I get stressed out while I’m studying in school. Playing a board game every now and then makes me feel more relaxed and I go back to studying, feeling refreshed,” Choi In-yeop, 15, a Yangji student said.

The thing that distinguishes Daewang Middle School in Suseo-dong, southern Seoul, is its bathrooms. 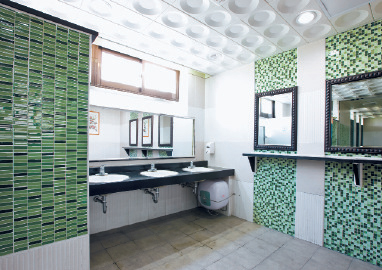 The men’s room at Daewang Middle School in Seoul has a bright atmosphere with green tiles on the wall.

The school’s bathrooms are so serene that the school was awarded the first prize in a contest for “beautiful public bathrooms” organized by the Gangnam District Office in 2008.

Daewang began renovating its bathrooms earlier that year after it won Culture Ministry funding. The school targeted the bathrooms because the majority of student delinquencies occurred there.

“After we remodeled the school bathrooms, we started seeing fewer student delinquencies, such as smoking and student-on-student violence,” said Kim Seung-su, the deputy principal of Daewang Middle School.

The bathrooms were painted in unusual colors such as purple and light green to brighten the mood, the interior lighting was brightened, and fragrance dispensers were installed. Now, with couches and tables sitting at an alcove near the entrance, these restrooms have become “rest rooms” in the true sense.

As at Yangji Middle School, the changes were just superficial at first, but the external changes implemented at Daewang brought about marked changes in student behavior. Students who had had no qualms about spitting on bathroom floors stopped doing it, and students started to care about their environment.

They no longer scribble on the walls or throw garbage on the floors, which has led to an overall decline in school violence.

“The positive changes brought about by the changes in the environment of our school bathrooms, which are now like the bathrooms in a first-class hotel, have motivated us to upgrade other school facilities as well,” Kim said.

On the fourth floor of Jungang Elementary School, located within the Hanok Village in Jeonju, there is a special room decorated entirely with hanji, traditional Korean paper. The room was once two separate classrooms that were used for after-school extracurricular activities, but the two rooms were made into one as part of a 100-million-won renovation project that was supported by the Culture Ministry. 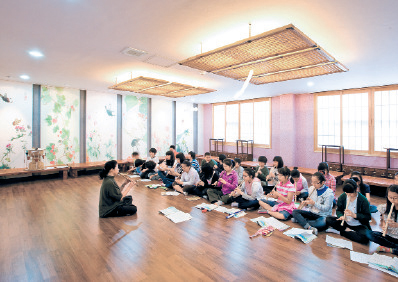 A unused classroom at Yangji Middle School in Jeonju has been transformed into a gallery, which now serves as a local cultural center. By Kwen Hyek-jae

The class that was going on at the time of this reporter’s visit had an atmosphere of freedom. About 25 fifth-graders were sitting together here and there, learning from a teacher how to play the danso, a short bamboo flute.

The soft LED lighting in the room illuminates the hanji that covers the walls and the overall atmosphere in the room was nice and warm. Equipped with ondol, the Korean floor heating system, it offers students a comfortable place to gather.

In fact, there was neither torn hanji paper, nor scribbles on the walls.

“Most of us want to take the classes in this room because it is nice, warm and cozy, and we can actually roll around,” Lee Seung-ji, 11, one of the students, said.

The hanji room also serves as a place for meetings between teachers and parents, as well as a space for programs where students and their parents learn about hanji together during school vacations.

“When they are here in this room, students seem to feel more attached to their teacher and are more interested in what they learn than [when they are] in the regular classrooms,” Jeong, the Jungang principal, said.