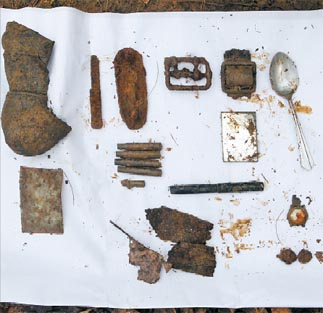 An M1 cartridge, shell casings and an empty picture frame were found with a Korean War soldier’s remains.

On May 4, near Buksan-myeon, Chuncheon, right next door to the demilitarized zone, a team from the Ministry of National Defense was deployed along with a special commando unit, not to carry out war games or gather intelligence, but to excavate the remains of Korean War victims.

After an hour of climbing the mountainous terrain, the team finally reached its destination. Around 200 trenches dug during the war were known to exist in the area, and in one of them, the team was able to find the body of a young soldier who faced a lonely death some 60 years ago.

From the remains, it seemed the soldier was bending his knees when he died. In another trench nearby, the team excavated the remains of another soldier. His helmet nowhere to be found, the soldier’s skull was covered with dirt and the roots of trees and grass. His two thigh bones lay about four hand lengths apart, but his sternum, kneecaps and the rest of his legs were not found. One of the excavation team members measured the soldier’s thighbone. It was 43 centimeters (17 inches), which suggests the soldier was of average height. Along with the bones, the team found an empty M1 cartridge, a spoon, a button from a uniform and a plastic cover for a photograph, the memento itself long gone.

This soldier might have belonged to the seventh regiment of the Sixth Infantry Division, which fought the North Korean People’s Army right after the war broke out. Or maybe he was from the 50th regiment of the Eighth Division, which established a defense line in the highlands during the Jan. 4 retreat. In fact, this was once a fierce battlefield. North Korean fire probably knocked off the soldier’s helmet. Experts on the team said that if this soldier had survived the battle, he would now be in his 80s.

“Isn’t it so quiet? This soldier was guarding the highlands up until today, unaware of the fact that the war was over,” said Lee Yong-seok, head of excavation team while offering alcohol in honor of the deceased. For 10 years, Lee has crisscrossed the hills and fields of South Korea, excavating the remains of soldiers to bring them back to their families. In all, he has found the remains of 4,696 fallen soldiers from the Korean War. But the number of troops still missing is about 130,000. Among them, approximately 30,000 are presumed to be somewhere around the DMZ. This year alone, 563 bodies were excavated nationwide.

A military remains excavation team bears the bones of a rediscovered Korean War soldier back to their headquarters. By Kim Tae-seong

In a trench not too far from where Lee was digging this month, 19 bodies were found recently. Most of the excavation is done by analyzing data collected during the war. Due to a lack of information, the team sometimes has to dig at least 100 holes to be lucky enough to find a deceased comrade.

“As a soldier, excavating another soldier’s body is like digging up my own,” Lee said. “Every soldier needs to go out to the battlefield with this confidence, that we are one. Although 60 years have passed, I will do everything to find every single one of them.”

These old soldiers are finally resting after 60 years. Cpl. Lee Ki-baek, who was the first on the team to find the body of a soldier, remembers every single one he has excavated.

“It’s hard to erase the memory. I remember every single one of them. And I wonder, if I were one of them, would I have fought like them at the risk of my own life? I attend to the excavation with my deepest respect,” he said.

In fact, excavating remains is a battle against time. The soldiers have already been underground for too long, and they can’t wait forever. The excavation team feels more and more impatient as the generation that remembers the war fades away. The fallen soldiers’ siblings, children and spouses have begun to pass away or are in their final years.

What the excavation team urgently needs is DNA from the surviving relatives of soldiers who died in the Korean War. It’s the only way to confirm their identity and to let them rest in peace.

Jang Yoo-ryang, 41, a member of the identification team, said the bereaved families feel sorrow, too, even so many years later.

“When we held the blood-testing day for the families of the fallen soldiers, most of them showed up. They all said they no longer weep. But as soon as they sat down for the process, all of them shed tears. I really want to find their loved ones once again.”