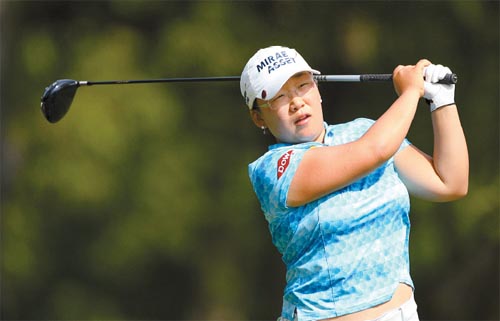 Shin Ji-yai of Korea hits her tee shot on the 13th hole during the third round of the Sybase Match Play Championship at Hamilton Farm Golf Club on May 22 in Gladstone, New Jersey. [AFP/YONHAP]

Shin downed the eighth-seeded American 2 and 1 on a hot, humid afternoon at Hamilton Farm.

“This match was so big,” Shin said, admitting that Wie’s vaunted length off the tee was a bit intimidating in the match play format.

“When I saw the pairing, I was a little bit worried because she’s so long.”

Shin, 22, is seeking her first LPGA title of the year after winning six times in the last two seasons.

She also owns 23 international victories, and took over the world No. 1 ranking from Lorena Ochoa, who couldn’t hang onto the top spot in her last tournament before heading into retirement earlier this month.

“I didn’t play as well as I wanted,” Wie said. “I think I know exactly what I need to work on. I’m going to work hard the next two weeks and try to win.”

Shin will play fellow South Korean Yoo Sun-young - a 2-and-1 winner over fourth-seeded Yani Tseng of Taiwan - in the semifinals Sunday morning.

The championship match will follow on Sunday afternoon. In the other quarterfinals, 10th-seeded Angela Stanford of the United States cruised past Britain’s Catriona Matthew 5 and 3 and Amy Yang beat fellow South Korean Kang Hae-ji 1-up.

Shin took the lead for the first time when Wie bogeyed the 15th after finding tall rough off the tee.

Shin won the 16th with a 15-foot putt while Wie was in a bunker. When Wie missed a 10-foot birdie attempt on 17, the match was over.

“She was in difficult situations,” said Shin, who added that she tried not to be distracted by the attention focused on her opponent.

“She’s a superstar,” Shin said. “I just tried to focus on my game.” In the morning third-round matches, Shin beat Beatriz Recari 4 and 3, while Wie survived some shaky ballstriking to beat France’s Karine Icher 3 and 2. In the afternoon, Wie birdied the par-five second hole to take a 1-up lead, and Shin squared the match with a five-foot par putt at the seventh.

Wie drained a 25-foot birdie putt from the edge of the green to win the 12th, punching the air in pleasure.

“It was just 12, so I’m not worried because I’ve got six holes left,” Shin said.

And indeed she leveled the match at the next hole with a 12-foot birdie putt after Wie’s approach went off the back of the green.

“I was thinking, this is my birdie chance,” Shin said.