Teachers, officials to be fired for playing politics

Teachers, officials to be fired for playing politics 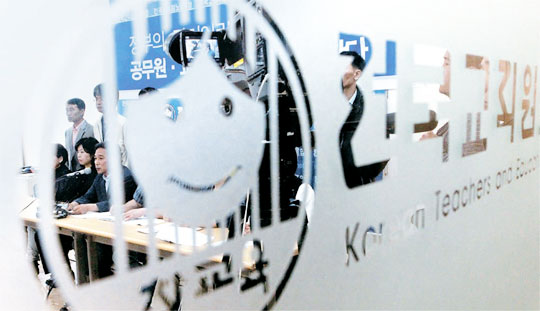 Hundreds of teachers and civil servants indicted this month for joining and paying dues to the Democratic Labor Party will be fired, the Ministry of Education and Ministry of Public Administration and Security said yesterday.

The Education Ministry held a meeting with its audit and inspection officials at local education offices across the country on May 19 and they agreed to dismiss 134 public school teachers and 83 civil servants.

“Violating a law that bans schoolteachers from political activities is a serious concern, and teachers who were deemed to have intentionally engaged in DLP activities are on the dismissal list,” an official with the Education Ministry said. “Local education offices will conclude the dismissal procedures within 60 days.”

In Korea, teachers and public officials are prohibited by law from taking part in organized political activities such as joining parties.

A total of 273 teachers and civil servants from the Korean Government Employees’ Union and the Korean Teachers and Education Workers’ Union - including teachers’ union head Jeong Jin-hu and civil servants’ union leader Yang Sung-yoon - were indicted for allegedly paying about 115 million won ($96,370) in political donations to the minor opposition party since 2005. The remaining 56 who have not been dismissed are either retired or teaching at private schools. The Education Ministry is mulling firing 35 private school teachers.

This is the first time that over 100 teachers were dismissed in an Education Ministry disciplinary measure. In 2007, 192 teachers were punished for staging protests against the introduction of a teacher evaluation system, but many either received reprimands or had their salaries cut for few months.

The Korean Teachers and Education Workers’ Union and the Korean Government Employees’ Union lashed out, calling the ministries’ action politically motivated. The teachers’ union argued that the government wants to help non-teacher union candidates win education superintendent posts in the June 2 local elections by dismissing union members. Candidates running for the posts are clearly divided into two camps, one supporting the teachers’ union and the other promoting themselves as anti-teachers’ union.

“The court will decide whether public servants’ and teachers’ political activities are illegal,” the unions’ leadership said in a joint press conference at the union headquarters in Yeongdeungpo, Seoul, yesterday afternoon.

The two unions said they will launch a full-fledged fight against the government. The leadership of the teachers’ union, including its head, Jeong, will stage an indefinite hunger strike in front of the Education Ministry building today. Yang, the civil servants’ union head, said he will call an emergency meeting today to decide its response to the government.