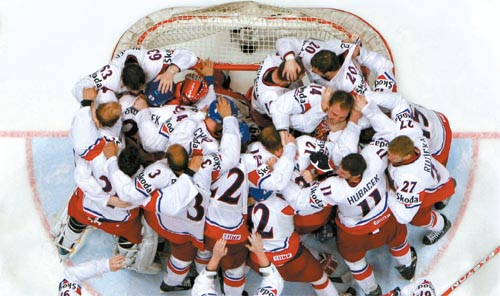 The Czech Republic’s players celebrate winning their gold medal game against Russia at the Ice Hockey World Championships in Cologne on May 23.[REUTERS/YONHAP]

COLOGNE, Germany - The Czech Republic won the ice hockey world championship on Sunday by ending Russia’s 27-game winning streak at the tournament with a 2-1 victory in the final.

Jakub Klepis gave the Czechs the lead after 20 seconds, and captain Tomas Rolinek made it 2-0 with less than two minutes left in the second period. Pavel Datsyuk pulled a goal back for Russia with 35.3 seconds left in the game.

In the third-place playoff, Jonas Andersson scored twice in the third period as Sweden beat host Germany 3-1 to win its 15th bronze medal and sixth since the current playoff format was introduced in 1992.

In front of a sold-out crowd of 19,132 at Lanxess Arena, the Czechs took the lead on their first rush. Jaromir Jagr had the puck behind Semyon Varlamov’s net, came out from the left and found at the far side an unmarked Klepis, who blasted into the empty net with Varlamov slow to cover.

Vokoun was forced to make a great save on Maxim Afinogenov three minutes in, while Russia’s Sergei Federov hit the post a minute later. Datsyuk found the net on a power play at the end of the first period, but a video replay ruled the Detroit Red Wings forward had scored just after the horn.

The Czechs withstood plenty of pressure, then doubled the lead with 1:47 left in the second period, with Karel Rachunek’s pass from the right side going in off the skate of Rolinek.

In the third period, Vokoun made a fine stop on Alex Ovechkin, who had space and time before winding up for his slapshot. Russia’s Alexei Emelin was sent to the bin for five minutes midway through the period after a misconduct penalty for a hit on Jagr. Datysuk hit Ilya Kovalchuck’s pass with a first-time shot with 35.3 seconds remaining to bring Russia within one goal.

In the earlier game, Magnus Paajarvi Svensson opened the scoring for Sweden less than three minutes into the game. Germany equalized through Alexander Barta, who converted his own rebound with four minutes left in the second period. But Andersson scored two more goals in the third period to win the game.