Korea shuts out Japan in friendly

Korea shuts out Japan in friendly 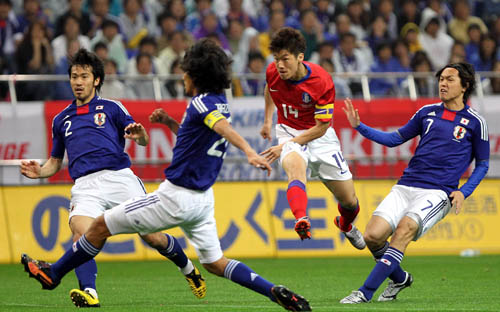 Park Ji-sung, center, scores the opening goal in the sixth minute of the friendly match against Japan yesterday. By Lee Young-mok

Korea jumped to an early lead and held off Japan to earn a confidence-boosting 2-0 win over their archrivals at Saitama Stadium in Japan in front of a sold out crowd of 60,552, including approximately 3,000 Korean fans clad in red, last night.

It did not take long for Korea to take the lead as Park Ji-sung, who gained possession of the ball in the opposing zone, dribbled past several defenders and released a shot just inside the penalty box area to score the opening goal of the game in the sixth minute. Park Chu-young added another goal in the dying minutes on a penalty kick at the 90th minute. Park was recovering from a lingering right hamstring injury.

Japan led in most offensive categories including time of possession and passes connected but failed to capitalize on their efforts.

The key to Korea’s win was its midfield, consisting of Park Ji-sung, Lee Chung-yong, Kim Jung-woo and Ki Sung-yeung. The four stayed busy in neutralizing the opposing offense, while the tandem of Park and Lee with forward Yeom Ki-hun used their speed and vision to stretch the opposing defense by making good use of attacking routes down the sidelines.

At the start of the second half, Huh decided to go with Park Chu-young in place of starting forward Lee Keun-ho and inserted veteran midfielder Kim Nam-il in place of Kim Jung-woo. Lee, who had earned the trust of Huh by scoring seven goals in the regional qualifying stages, had been mired in a slump of late, with his last goal coming off a penalty kick against Iraq in March 2009. Despite an energetic outing, Lee failed to break that slump.

Japan’s manager Takeshi Okada had said leading up to the game that his team was intent on revenge for the embarrassing 1-3 loss to Korea at the East Asian Football Championships in February. Korea’s manager Huh Jung-moo, for his part, had downplayed the game as a friendly match to help his players prepare for the World Cup. Regardless of the contrasting attitudes coming into the game and the emphasis placed on a safe game free of injuries, players from both sides provided the fans with a physical game living up to the rivalry between the two neighboring nations. The game grew increasingly physical as the game wore on and Korea committed a total of 19 fouls compared to Japan’s 18.

Jung Sung-ryong, who got his second consecutive start in net in place of veteran Lee Woon-jae, did a respectable job in earning another shutout.

With the win, Korea added another win to a rivalry which dates back to the regional qualifier for the 1954 Switzerland World Cup. Korea now boasts an all-time record of 40 wins, 20 draws and 12 losses against Japan.

Lee Dong-gook, who had suffered a tear on his right hamstring during a friendly match against Ecuador on May 16, was excluded from the roster with Kim Jae-sung, who suffered an right ankle injury. Lee and Kim went through a warm-up with the team trainers prior to the start of yesterday’s friendly. Lee was expected to take as much as two to three weeks to recover but is on course to be ready by the final 23-man roster due date of June 2.

“The two to three week recovery time is the average time, but the recovery time for athletes is significantly shorter,” said Huh.

Korea now boasts an all-time record of 40 wins, 20 draws and 12 losses against Japan.

Korea departs for Austria to set up camp in preparation for the World Cup today. Korea will play Belarus in Kufstein, Austria, on May 30 and then will play their final tune-up match against Spain in Innsbruck, Austria on June 3.