Marquee matchup will have to wait

Marquee matchup will have to wait 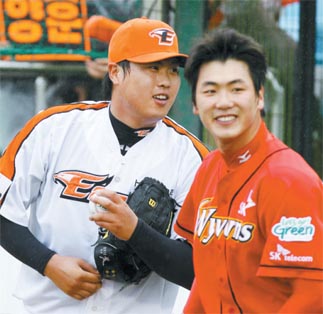 Kim Kwang-hyun of the SK Wyverns, right, jokes with Ryu Hyun-jin near the Hanwha dugout after last Sunday’s game was rained out.[YONHAP]

Baseball fans likely will have to wait until next month to watch the much-anticipated showdown between Ryu Hyun-jin of the Hanwha Eagles and Kim Kwang-hyun of the SK Wyverns.

The southpaw pitchers were scheduled to take the mound against each other last Sunday in Daejeon, but the game between the clubs was rained out.

Ryu and Kim - in their fifth and fourth seasons, respectively - rank as two of the best starting pitchers in the league, but they have not yet squared off against each other in a game.

“Ryu Hyun-jin has had a long time off, and it could affect his conditioning and play,” Hanwha manager Han Dae-hwa said.

Kim’s next start is scheduled for Wednesday against the Samsung Lions. SK manager Kim Sung-geun said Song Eun-beom will start tonight’s game, giving Kim Kwang-hyun some time to recover from the less-than-stellar outings he has had as of late.

“There is a strong possibility that the two pitchers [Ryu and Kim Kwang-hyun] will face off in the three-game series in Incheon” next week, said Kim Sung-geun.

The most likely date for the showdown is on June 1, as Kim would be coming off an ideal five-day rest. If Ryu does not start two games this week, he will also be set for the June 1 start.

In order for the Ryu and Kim matchup to materialize, pitcher Julio DePaula will have to start one game for Hanwha. In the match against the Doosan Bears on May 19, DePaula started his first game of the season, giving up three runs in three and one-third innings. In another scenario that would open the door to a battle between the SK and Hanwha star pitchers, Kim Hyeok-min would have to make a return from the minors.

On the SK Wyverns side, it boils down to how Song is used. If the pitcher starts two games this week, it gives the SK coaching staff the flexibility to start Kim on June 1.

Both Ryu and Kim signaled their interest in meeting on the mound.

“It’s too bad the matchup was delayed. But what is certain is that we will have a chance to meet in the future,” Kim Kwang-hyun said.

Since winning Rookie of the Year and Most Valuable Player honors in 2006, Ryu posted the most strikeouts in the 2007 and 2009 seasons.

Kim won the 2008 Player of the Year honor and also posted the highest number of strikeouts that season. In 2009, Kim registered the lowest ERA and highest winning percentage.