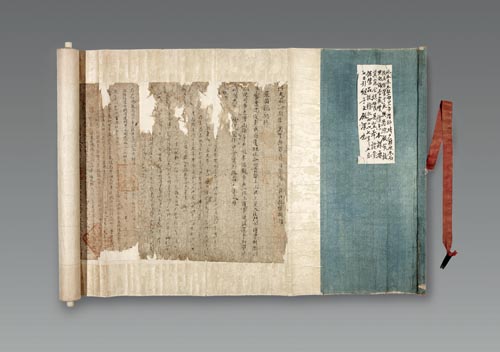 The family registry document of King Taejo was written in 1390, just before the establishment of the Joseon Dynasty (1392-1910), in Hamgyeong, the king’s hometown. It was kept in a shrine in Hamgyeong, but moved to Seoul during the era of Japanese colonial rule (1910-1945).

The register comprises three parts: The first part is a record of 20 private slaves bestowed to Yi Seong-gye (later King Taejo) by the king of the Goryeo Dynasty (918-1392) in 1390. The second part contains a guide to the register and other detailed information. The third part is a record of 30 houses in Kaesong, but its relevance to Yi has not yet been confirmed. Yi’s family register also contains information about his government posts, children, siblings and land.

During the Goryeo Dynasty, families made two copies of the register. One was kept at home and the other was submitted to the government.