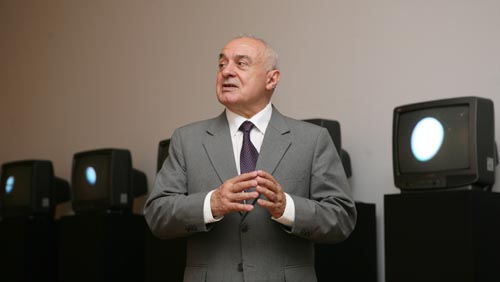 Tomas Vlcek, director of the Collection of Modern and Contemporary Art at the National Gallery in Prague, stands in front of Paik Nam-June’s installation “Moon is the Oldest Television” at MOCA’s Deoksu Palace branch in central Seoul earlier this month. Provided by MOCA


Tomas Vlcek, the director of the Collection of Modern and Contemporary Art at the Czech National Gallery in Prague, was in Seoul earlier this month for a preview of the exhibition “Floating Hours: Moon is the Oldest Clock,” which is on display at the Deoksu Palace branch of the National Museum of Contemporary Art in central Seoul through July 4.

The show is scheduled to tour to Bulgaria and the Czech Republic between August and October through an arrangement by Korea’s MOCA and the Korea Foundation, which are sponsoring the tour to celebrate the 20th year since Korea established diplomatic relations with the two countries.

Vlcek said that such a large-scale exhibition of contemporary Korean art in Prague scheduled for this autumn could appeal to both connoisseurs and the public there, because of its interesting theme and the Czech people’s open-minded attitude toward new and different kinds of art.

The exhibition features the works of 11 Korean modern and contemporary artists, ranging from the world-famous Paik Nam-june (1932-2006) to emerging artists such as Lee Jin-joon, 36. It will be the largest exhibition of Korean art ever held in either of the East European countries.

The show is divided into four sections - “River,” “Water,” “Moon” and “String.” The sections are meant to reflect the four qualities of time - flowing; spreading; filling and tilting; and continuing, explained Kim Nam-in, the curator of the exhibition. 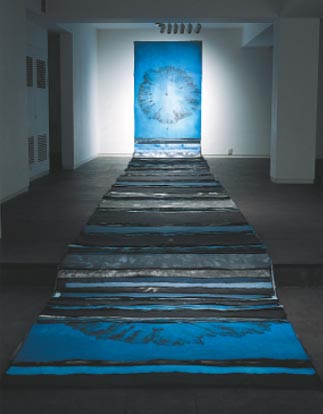 “Undulating” (2006) by Han Eun-sun shows the permeating quality of time through the spread of ink water on paper.

For example, “Undulating” (2006), an installation work in the Water section by Han Eun-sun features papers on which Chinese ink has spread to different levels.

“The dispersion of the water is the visualization of the slowly permeating movement of time,” Kim said.

That subject was an interesting one for Vlcek, who said in an interview on May 14, “Czech culture is in a place of transition; it changes all the time. So the idea of ‘floating’ is something very natural for us. That’s probably why many Czech painters look for their identity in the subject of water.”

Vlcek said the Moon section of the exhibit will be also resonate with the Czech people, because one of the country’s scientists contributed to the field of physiology by recognizing deep dimensions in the human life cycle connected with sleeping and the moon.

Vlcek was also impressed with the exhibit’s attempt to get viewers to sense time not as modern mechanical units but as part of nature, in tranquility.

“We have the feeling that there is something antagonistic between human nature and modern technology,” he said. “Art looks for ways to connect the two and for ways to create harmony between them. The exhibit is a good case for that.”

The soap sculpture “Translation - Weathering Project” (2010) by Shin Mi-kyung, which is intended to gradually disappear, symbolizes memories driven out over time.

That is exactly what the exhibit hopes to convey, curator Kim said.

Asked what he feels is the most impressive work of art in the exhibition, Vlcek said that each piece was impressive but focused his comments on Paik’s work.

“Many Korean artists have been influenced by Paik Nam-june, the country’s first international star artist and one of the greatest artists of the 20th century,” Vlcek said. “In this exhibition, other artists’ works are in good harmony with Paik’s.”

The exhibit displays several of Paik’s pieces, including the installation “Moon is the Oldest Clock,” which is in the Moon section. The work, which inspired the title of the exhibition, features TV monitors, each of which shows a different phase of the moon.

Sitting across from the work is Kang Ik-joong’s “Moon Jars” painting.

Vlcek said that people in Prague will be interested in the exhibit because the city is a multicultural place.

That helps explain why the National Gallery in Prague boasts a collection of the most important Cubist works by Pablo Picasso, Vlcek said.

Czech art critics such as Vincent Kramar were among the first to recognize the importance of the Cubists, including Picasso and Georges Braque, Vlcek said. Later, the country developed its own Cubist movement called Czech cubism.

The exhibition also shows a group of soap sculptures by Shin Mi-kyung, which are installed both inside and outside the museum. The sculptures are intended to gradually disappear with the effects of the weather.

In the String section, “All,” by Ham Youn-joo, which is made with the artist’s hair, is also an eye-catching piece.