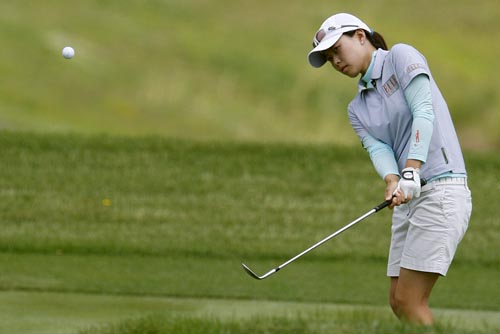 Yoo Sun-young chips onto the ninth green during the final round of the Sybase Match Play Championship golf tournament in Gladstone, New Jersey. [REUTERS/YONHAP]

“My goal was to get past the first two days,” Yoo said. “I did a lot better.”

And she did it from the toughest quarter of the 64-player draw, beating No. 32 Karen Stupples, No. 5 Cristie Kerr, No. 12 Kim Song-hee and No. 4 Yani Tseng before finishing off Shin 2 and 1 and No. 10 Stanford.

“It was tough,” said Yoo, seeded 28th. “I tried to be a little more aggressive out there because it’s match play. I think it worked out pretty good.”

Yoo also became the LPGA Tour’s eighth straight foreign winner and 25th in the last 26 events. Michelle Wie - in the Lorena Ochoa Invitational in November - is the lone U.S. champion since Kerr won the Michelob Ultra Open a little over a year ago.

Stanford bristled a bit when she was asked about the U.S. victory drought.

“I don’t make anything of it. I think you guys [the media] make a lot out of it,” Stanford said. “We’re a global tour and I wasn’t trying any less out there. ... If anything, I was trying harder because I know that it just keeps coming up.”

Patiently working her way around the hilly course on a cloudy, muggy afternoon, Yoo won the 13th and 14th holes with pars to take a 1-up lead.

She doubled the advantage on the par-3 16th with her first birdie of the match, holing a 15-footer after Stanford missed her 20-foot birdie try.

The match ended on the par-4 17th when Stanford missed her birdie putt and conceded Yoo’s birdie. Yoo leaped into caddie Kurt Kowaluk’s arms in celebration and got a water shower from fellow South Koreans Shin and Amy Yang.

“I felt really comfortable out there,” Yoo said. “I wasn’t nervous.”

Yoo won the par-3 third with a par, then halved the next seven holes, with the players splitting the par-4 ninth with bogeys.

Stanford’s approach from 138 yards rolled off the green into thick, wet rough. She took a drop because of standing water, then watched her third shot roll back into the same area. After another drop, she hit to 4 feet to set up a bogey, and Yoo two-putted for par to square the match.

“It was really mushy down there, but I shouldn’t have been down there in the first place,” Stanford said. “I tried to hit an easy 9-iron. It got up in the air and started to float and I said, ‘Oh, boy!’”

Yoo took the lead on the par-4 14th with another two-putt par after Stanford failed to get up and down for par from a deep greenside bunker.

Yoo then made the 15-foot birdie putt on 16 to make it 2-up. Stanford got a bad break on the hole when her tee shot hit the flagstick and ended up 20 feet away.

“She’s a solid putter and, obviously, a solid player,” said Stanford, a four-time winner on the LPGA Tour. “If you don’t put any pressure on her, she’s going to make everything - and I didn’t put an ounce of pressure on her.”

Stanford advanced to the final with a 19-hole victory over Yang.

Shin rebounded from her morning loss to beat Yang 3 and 2 in the third-place match.