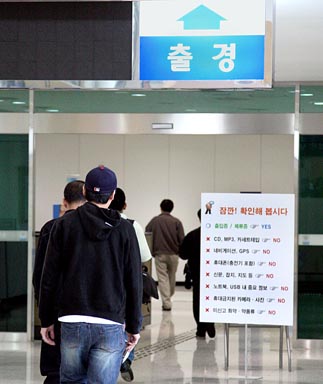 The future of the Kaesong Industrial Complex, the joint inter-Korean industrial base set up as a symbol of reconciliation, was once again put in doubt yesterday.

In response to North Korea’s torpedo attack on the South Korean warship Cheonan on March 26, Seoul said it will prohibit new businesses from setting up in Kaesong and will reduce the number of South Korean businesspeople there.

According to the Unification Ministry, which handles inter-Korean affairs, about 900 to 1,000 South Koreans stay in Kaesong during a typical week, and about 300 to 400 on weekends. An official at the ministry told reporters yesterday that the figures will be cut by as much as 60 percent.

South Korea froze all inter-Korean trade but stopped short of shutting down the Kaesong complex. Opened in 2003, the Kaesong site is considered the last symbol of improved inter-Korean ties this decade. More than 120 South Korean companies employ about 42,000 North Koreans there.

Shutting the complex entirely would have upset South Korean businesses that use Kaesong as their base for exports to Asia. In a press conference yesterday, Unification Minister Hyun In-taek stressed that the current production activities in Kaesong “will not be discouraged.”

It wasn’t exactly a ringing endorsement, but Kaesong is considered so sensitive that even President Lee Myung-bak, in his charged national speech yesterday, admitted the Kaesong-related issues “will be duly considered [later], taking their unique characteristics into consideration.”

Hyun sidestepped the question of whether South Korea was prepared to shut down Kaesong before North Korea did. He said instead that North Korea should take note of Seoul’s efforts to preserve the complex and that the South “will never tolerate any harm to our citizens.” Defense Minister Kim Tae-young said there is “a great possibility” that South Korean workers may be held hostage in Kaesong and that the government was considering defensive measures.

In March last year, North Korea cut off military communications at the border, stranding workers who needed authorization to cross the border through the severed channel. In the summer, the North demanded a steep hike in wages and asked South Korea shell out $500 million for real estate for which Seoul had already paid.

A South Korean engineer was held for more than four months for allegedly criticizing the North’s regime.

These events forced South Korean companies to scale down operations or withdraw from Kaesong. Whether more will follow is up to the two governments, said Lee Im-dong, an official at the association of firms in Kaesong.

“I am sure the two governments understand better than anyone the value of the Kaesong complex,” Lee said. “We hope they view the place from an economic, not a political, point of view.”