No more attacks or else: Lee

No more attacks or else: Lee

President Lee announces South Korea’s response to the attack on the Cheonan yesterday at the War Memorial of Korea in Yongsan, Seoul. By Cho Mun-gyu

South Korea will no longer tolerate North Korean provocations and will change its military posture from passive defense to proactive deterrence, President Lee Myung-bak said yesterday, spelling out his country’s response to the communist regime’s attack on a patrol boat in March.

“From now on, the Republic of Korea will not tolerate any provocative act by the North and will maintain the principle of proactive deterrence,” Lee said in an address to the nation, televised live Monday morning. “If our territorial waters, airspace or territory are militarily violated, we will immediately exercise our right of self-defense.”

“The sinking of the Cheonan constitutes a military provocation against the Republic of Korea by North Korea,” Lee said, vowing that “North Korea will pay a price corresponding to its provocative acts.”

“From this moment, no North Korean ship will be allowed to make passage through any of the shipping lanes in the waters under our control, which has been allowed by the Inter-Korean Agreement on Maritime Transportation,” Lee said. “The sea routes meant for inter-Korean exchanges and cooperation must never again be used for armed provocations.” 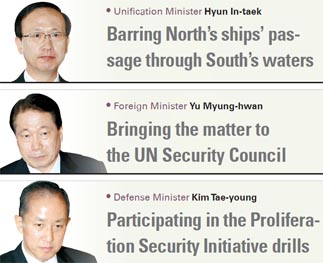 After a solemn-faced Lee set the tone in his speech, the foreign and unification ministers held a joint press conference detailing the government’s military, economic and diplomatic actions to punish North Korea, including investment and exchange bans and military drills with U.S. forces focused on the reclusive nation.

An international team of experts concluded last week that a North Korean submarine infiltrated the South Korean waters west of the peninsula and fired a torpedo at the Navy warship Cheonan, sinking the ship and killing 46 sailors on March 26.

“In close consultations with the nations concerned, the government will refer this matter to the UN Security Council, so that the international community can join us in holding the North accountable,” Lee said. “Many countries around the world have expressed their full support for our position.”

“Trade and exchanges between the Republic of Korea and North Korea will also be suspended,” Lee said.

“However, we will continue to provide assistance for infants and children,” he said. “Matters pertaining to the Kaesong Industrial Complex will be duly considered, taking their unique characteristics into consideration.”

The joint industrial site built in the North as a symbol of reconciliation is regarded as the last remnant of improved inter-Korean ties under the former two governments’ Sunshine Policy. More than 100 South Korean companies employ about 40,000 North Koreans in Kaesong. Shutting the complex will likely anger South Korean businesses that use Kaesong as an Asian exports base.

According to Blue House chief spokesman Lee Dong-kwan, the president’s message about “proactive deterrence” means that South’s security readiness must be boosted to pre-emptively manage provocations from the North. “It’s also about our immediate exercise of self-defense when our territories are forcibly violated,” he said. “And it’s also a linking of the South’s economic cooperation and assistance programs with the political and military trust between the two Koreas.”

According to the Blue House spokesman, the president decided to give the address at the War Memorial of Korea to reflect the Korean Peninsula’s past, present and future. “Although 60 years have passed since the Korean War, the North still attacks the South, as we saw in the latest incident,” he said. “While we will hold the North accountable and punish it for the attack, the president also wanted to give the message that we must not give up hope regarding the future of the two Koreas.”

In his speech, Lee urged North Korea to apologize for the attack. “As compatriots, I am truly ashamed,” Lee also said. “It is now time for the North Korean regime to change.”

The Blue House spokesman also said the essence of Lee’s message is change for both Koreas. “The Korean Peninsula must be different before and after the Cheonan’s sinking, and our responses will also be different,” he said. “It is also a message that the North must change.”

In a joint press conference that followed Lee’s speech, Unification Minister Hyun In-taek said North Korean ships will not be able to pass through South Korean waters and all inter-Korean people exchanges will be suspended.

“No South Koreans will be permitted to visit the North, except for the Kaesong Industrial Complex and Mount Kumgang resort,” Hyun said, adding that no new investments and assistance programs will be allowed from now on.

While the South will allow operations at the Kaesong complex to continue, the number of South Koreans staying there will be reduced, Hyun said. “If the North betrays the South’s deep commitment to maintaining this project and threatens the safety of our citizens, we will never tolerate such an action,” he said. Defense Minister Kim Tae-young detailed the military’s countermeasures. “Starting today, we will resume the psychological warfare against North Korea, which has been suspended for six years,” Kim said.

The two Koreas agreed in 2004 to stop all propaganda activities along the inter-Korean border and to prevent accidental clashes in the Yellow Sea, Kim said. Upon Kim’s remarks, the Defense Ministry said yesterday it will resume broadcasting of propaganda toward the North starting in the afternoon. As soon as the weather clears up, the ministry will also fly propaganda leaflets into the North. “In the nearest future, the U.S. and South Korean militaries will jointly hold an anti-submarine drill in the Yellow Sea,” Kim said, adding that the exercise will focus on deterring underwater attacks from the North and improving the forces’ firing accuracy.

The South will actively participate in the maritime drills under the U.S.-led Proliferation Security Initiative to interdict ships used to move weapons of mass destruction, Kim said.

“The Navy will conduct a drill in the regional waters to stop the North’s proliferation,” he said, “and we will also participate in a drill outside the region to be hosted by Australia in September.”

Kim also vowed to improve the South Korean military’s readiness. In his speech, President Lee also said, “We have to admit that our armed forces made mistakes as well. Because of this incident, the government will solidify national security readiness.”

Foreign Minister Yu Myung-hwan reiterated Seoul’s plan of bringing the matter to the UN Security Council and bolstering international cooperation to inflict sanctions on the North.

Calling the North’s attack “a direct threat and challenge to peace and stability, not only on the Korean Peninsula, but also in Northeast Asia and beyond,” Yu said the government has launched an aggressive diplomatic campaign to punish the North. So far, 21 countries as well as major international organizations have joined the South’s condemnation, he said.

Yu said the U.S. and South Korean authorities have been closely coordinating their moves, including bilateral sanctions each toward the North. The South Korean, Japanese and Chinese leaders’ summit this weekend in Jeju will also focus on coordinating bilateral and multilateral countermeasures, he said.