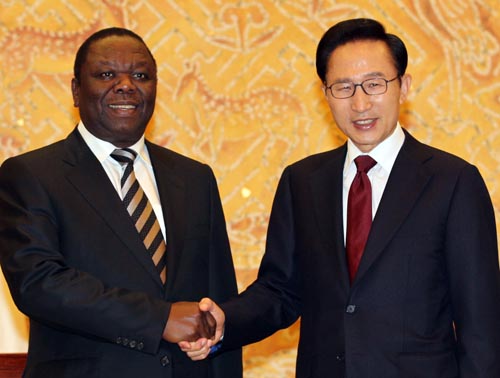 In talks with his counterpart Morgan Tsvangirai, the prime minister highly praised the Zimbabwean government’s efforts to rebuild its economy and hoped the two countries would further their cooperative ties in economy, trade and development, the office said in a release.

Tsvangirai responded positively to the request and asked to share in Korea’s success in rural development, as well as expand cooperation in the education field. He also asked for more South Korean investment in infrastructure construction, energy and resources development, the office said.

An investment protection agreement was signed after the two prime ministers concluded their talks.

Tsvangirai is the highest-ranking Zimbabwean government official to visit South Korea since the two countries forged diplomatic ties in 1994.