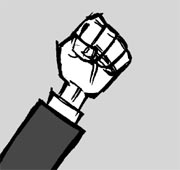 Winston Churchill became prime minister of Britain when Europe was in a war. The whole nation was fearful of a military invasion by Nazi Germany, which marched through the Netherlands, Belgium and France. Four days after taking office, he challenged the British in a speech filled with determination, saying, “I have nothing to offer but blood, toil, tears and sweat.” He also assured the people that the British government would fight the monstrous enemy with all its might and that the goal was victory because without victory, there would be no survival.

Before long, Britain confronted its worst nightmare when it had to fight Germany alone, because by then even France had been defeated. Churchill boosted the morale of his people, saying, “If we can stand up to him [Hitler], all Europe may be free and the life of the world may move forward into broad, sunlit uplands.” He concluded with: “Let us therefore brace ourselves to our duties, and so bear ourselves that, if the British Empire and its Commonwealth lasts for a thousand years, men will still say, ‘This was their finest hour!’” It was Churchill’s speeches that helped the British endure the nine-month-long blitz that started with the bombing of London and continued for 76 nights.

One of the virtues of a leader is the ability to present a vision that allows the nation to overcome a crisis. As writer Jonathan Swift once said, the role of a leader is to shed light on a vision so people can make it their own. Then, the possibility that the nation can attain its goal becomes that much greater because the energy of the whole nation is focused on that goal. Churchill’s speeches gave the British people assurances of victory, and they achieved it in the end.

To turn a vision into reality, it is essential for a leader to have the determination to make difficult decisions at the right time. Dwight Eisenhower, who was the supreme commander of the Allied forces in Europe during World War II and who together with Churchill and other world leaders led the war to victory, had it. The Normandy landings were scheduled for June 5, 1944. But there was a strong rainstorm that showed no sign of dying down, even early in the morning of June 6. The military leaders of the Allied forces were at a loss and waited for the final decision of the supreme commander. It was then that Eisenhower decided to launch the largest military operation in history.

After the announcement of the findings on the Cheonan sinking, tension is mounting on the Korean Peninsula. There is no knowing when and from where the North will provoke hostile acts. It is time for the president, as commander in chief, to present us with a strong vision and show determined leadership. His address to the nation on Monday was the first step. But our ability to turn this crisis into an opportunity to remake South Korea into a powerful country with watertight security all depends on the leadership of the president.