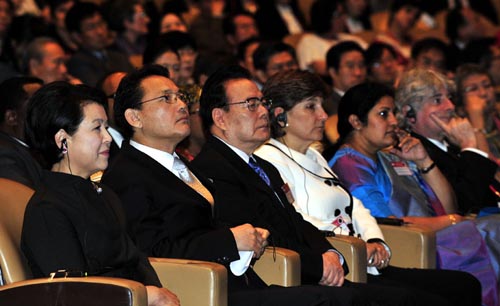 
Unesco praised South Korea as a model for promoting education and the arts, and urged the country to share its expertise at the G-20 Summit it will host in November.

Irina Bokova, Unesco’s director general, made the remarks as the UN cultural body met in Seoul for its quadrennial conference.

“Korea from the very beginning placed an enormous emphasis and importance on education as a stimulant, as a means to economic and social development, and now we see the fruits of these,” Bokova said in a press conference.

The first female Unesco director-general acknowledged well-known Korean directors like Lee Chang-dong, whose “Poetry” won the best screenplay award at this year’s Cannes Film Festival, and Hong Sang-soo, who took the top prize at the fest’s sidebar section, Un Certain Regard, with “Ha Ha Ha.” She also cited the country’s recovering economy amid the economic unrest in Europe and other regions.

As host of the G-20 economic summit, South Korea should play an active role to add the education issue to the agenda, she said.

Korea is “an excellent example when international community leaders are seeking answers to the present economic, social and financial crisis.”

The four-day gathering brought together about 2,000 officials, experts and activists from around the world to build an international consensus toward promoting arts education.

Following its inaugural meeting in Portugal in 2006, the conference is being held here on the occasion of the 60th anniversary of South Korea’s membership in the UN Educational, Scientific and Cultural Organization. South Korea joined the world body in June 1950, a few weeks before the outbreak of the Korean War.