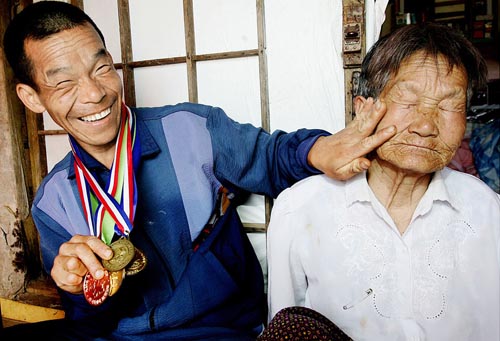 The story of Um Gi-bong and his mother, which originally appeared on the documentary series “Ingangeukjang,” was the basis for the film “Barefoot Gi Bong” in 2006. [JoongAng Ilbo]

In a world where TV dramas are constructed around plot lines involving adultery, violence and secrets, and reality programs show people behaving at their worst, there are two documentary series winning high ratings for producing simple stories about ordinary people. These people are not glamorous and they don’t have movie-star clothes. They have thick wrinkles, worn out T-shirts and tangled hair.

The two programs, “Human Documentary Love” and “Ingangeukjang,” have long been beloved by television viewers in Korea and are celebrating their anniversaries, fifth and 10th respectively, this month.

“We have different people on the show every year, but the theme is always the same,” said Jung Sung-hoo, the executive producer of Human Documentary Love, said in a press conference on Tuesday. “As human beings, we can all feel sympathy for other people when we hear these stories. After all, the story might be about you or our neighbors. Hopefully these documentaries will make families think about the precious things in their lives.”

Human Documentary Love first aired in May 2006. The series is broadcast every May, which is Family Month in Korea. The episodes feature stories about families, with a different family featured each week. 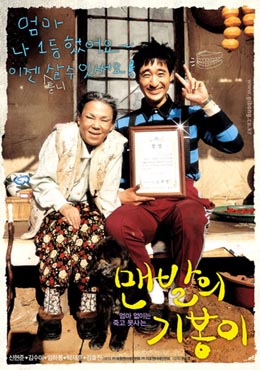 Previous episodes have featured: a family that had to say goodbye to the father, who was diagnosed with terminal cancer; a family who adopted a disabled boy with no legs; and a woman suffering from osteogenesis imperfecta, a rare genetic bone disease, who risks her life to become a mother.

The fifth season of Human Documentary Love starts tomorrow and will tell the stories of four families.

“It’s tough to record the daily lives of ordinary people who are not accustomed to huge cameras,” said producer Kim Hyun-ki. “So it usually takes between five and six months to make a 50-minute documentary.”

One particularly touching story is about Kim Kyung-chung and Ahn Eun-sook, a newly married couple and their three children. When Ahn is diagnosed with terminal lung cancer and is told she only has about a year to live, she chooses to spend more time with her family before she dies, instead of receiving chemotherapy. She goes on family trips and attends her son’s talent show.

Kim Sae-byul, who produced Ahn’s story, talked about the added challenge of trying to stay cool while filming such sad stories.

“When Ahn’s condition was deteriorating, I drove up to Seoul and picked up her children so that they could say goodbye to her,” Kim said as she choked back a sob. 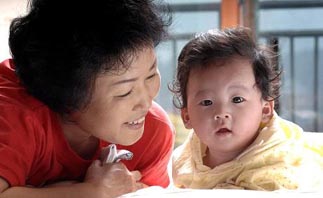 Four families will be featured as part of the “Human Documentary Love” series, including Sung-tan (below), who was found in the corridor of a small apartment building in Seoul last Christmas Eve. He has since found a home with a new family. Provided by MBC

Meanwhile, the weekly series Ingangeukjang (which, loosely translated, means “human story”) has become a television legend for the quality of its storytelling and the compelling characters it chooses to portray. There are five episodes per week, airing Monday through Friday, with the story of one person featured per week.

When the series launched in May 2000, nobody knew it would become this big. It now has an audience share of between 10 and 20 percent, which is amazing considering there are many TV dramas that can only claim an audience share of about 3 or 4 percent, according to Park Jung-jae, an official with KBS’s public relations team.

A total of 1,443 people have been featured on the show over the past 10 years. Seven of the stories have been made into films, including ““Malaton,” the 2005 film about an autistic boy runner, and “Barefoot Gi Bong,” a 2006 film about a mentally challenged boy who takes care of his mother.

The show has also made stars of two of its alumni, including Richard Yongjae O’Neill, a violist, and Sandara Park, now a member of the girl group 2NE1. Before O’Neill, who is a Korean adoptee, gained fame a musician, he appeared on the show in May 2004 looking for his birth mother. Park was shown in the early stages of her career, when she was a virtual unknown in Korea but famous in the Philippines, in an episode that aired in October 2004 in Korea.