Psychological thriller puts players on the edge of their seats

Psychological thriller puts players on the edge of their seats 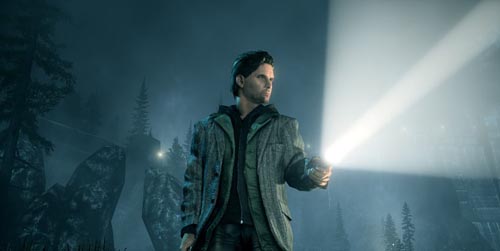 A screen shot from the game “Alan Wake”

Light might be Alan Wake’s best weapon against the dark-possessed townspeople who hunt him through the woods, but the episodic psychological thriller that bears his name is best enjoyed in total darkness with cranked-up surround sound.

“Max Payne” creator Remedy Entertainment did an outstanding job of setting an eerie mood with “Alan Wake,” which is presented in six highly polished episodes tied together by ending music and “Previously ... on Alan Wake” transitions.

The game’s premise bears a slight similarity to the Stephen King novella-adapted film “Secret Window,” starring Johnny Depp as a disturbed, divorcing mystery writer holed up in a remote locale.

Wake, a best-selling suspense author suffering from writer’s block, heads to the fictional town of Bright Falls, Washington, for some rest and recreation.

After his wife, Alice, tries to coax him into writing his first manuscript pages in two years, Wake takes off from their cabin to blow off some steam, but returns when he hears her screams. She disappears.

Wake wakes up behind the wheel of his crashed car deep in the forest and the mystery begins. Wake soon learns that an evil darkness has descended on the forest and has infected some of the town’s inhabitants. Armed with axes and hand-held sickles, the “Taken” can lumber slowly, then dart at Wake with a frightening pace of acceleration.

It really is creepy, and Wake must always watch his back. To defend himself, Wake starts with just a flashlight and a pistol, and it is a clever combination. The first step is to expose the enemies with light to weaken them, and the second is to fire his gun to finish them off.

As with any mystery, the plot is vague in the early scenes, but it is revealed and foreshadowed as Wake stumbles on pages of a manuscript. He apparently is the author, although he has no recollection of writing it. Other clues are revealed through black-and-white TVs airing “Night Springs,” a show in the style of “Twilight Zone,” and local radio broadcasts.

There is no map, but the game follows a somewhat linear path, guided by a heads-up display that sends him in the general direction of where he must go. The genre changes to more mystery than horror as daylight appears. Wake must try to talk to the townspeople and his agent and piece together what happened - and is happening.

The game is paced nicely and keeps players on the edge of their seats. About the only knock is that the “light, then shoot” combat grows a little repetitive as you get deeper into the game.