A city of art, but not for art’s sake

A city of art, but not for art’s sake 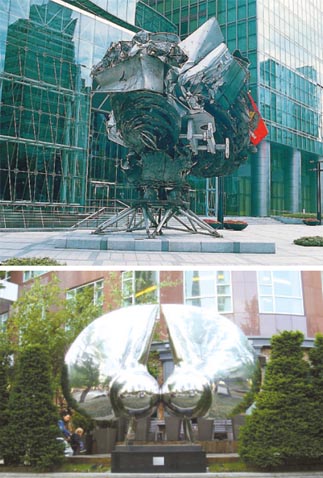 Many urban dwellers walk past the monoliths of glass and steel that make up the city without a second thought. But if you do stop and smell the concrete once in a while, you may notice Seoul is a city full of art: paintings, installations and most of all sculptures, placed inside or around offices and apartments.

Have you ever wondered why?

It’s not just to beautify the city. In fact, many of the pieces are little more than large chunks of metal or stylized cookie-cutter sculptures of families.

In fact, they’re legally required to be there.

In 1995, the Korean government passed a law mandating owners of buildings with more than 10,000 square meters (107,640 square feet) of floor space to commit at least 1 percent of the building’s construction costs to art, such as paintings, sculptures or works of calligraphy.

However, to get a construction permit under the law, owners only have to submit their designs to evaluation committees run by local governments that often have no knowledge of art, which means there’s often nothing to stop landlords from buying the cheapest steel cube they can find and plunking it down in the courtyard. 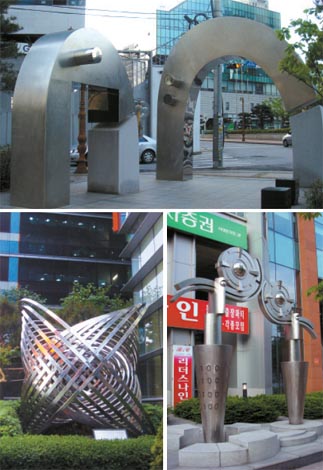 Top, “Amabel” by the famed experimental sculptor Frank Stella, located at the Posco building in southern Seoul, stands in vibrant contrast to the simple geometric steel sculptures installed at many buildings downtown, above. Second from top is Moon Shin’s “Mild” and bottom right is Kim Jae-kwon’s “Digital Tower,” mentioned in the text. “Amabel” provided by JoongAng Ilbo, other photographs by Park Sun-young

Take a walk around the office buildings of Jung District in downtown Seoul, and you may be surprised to see that the sculptures in front of many of them look pretty much similar to each other, and how very few have any connection at all to the architecture behind it.

Take, for example, Kim Jae-kwon’s piece “Digital Tower,” which stands in front of the Vavien building in Jung District, central Seoul. The building is home to a restaurant in the basement and an investment and securities company on the first floor. Neither have much to do with the digital world, and neither, for that matter, do the two sculptures, which seem to depict analog clocks in gunmetal gray.

What about the stainless steel sculpture named “Mild,” which sits on the corner near Fraser Place Central Seoul? It’s not even clear what the symmetrical piece represents, common to many of the works of Moon Shin, the sculptor.

“Evaluation committees are in place under local governments, but it is often the case that they lack experts and are likely to be politically influenced, which becomes more serious with provincial governments,” said Yun Tai-gun, the director of The Ton, a local art consulting firm.

“In fact, irregularities haunting the program also involve some evaluation committees, which are poorly qualified.” 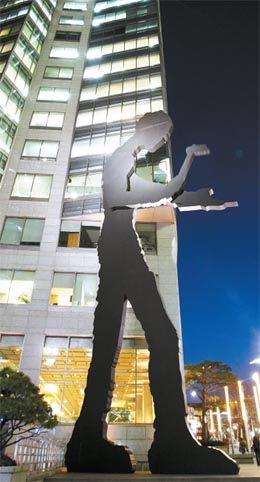 “Hammering Man,” at the Heungkuk Life Insurance building in downtown Seoul, was one well-received piece built under the art mandate. [JoongAng Ilbo]

Regardless of artistic merit, there have also been reports of corruption in competitions for the government-mandated expenditure among artists and their agents.

In 2002, a group of 25 artists, agents and building owners in Busan were indicted on charges of giving and receiving bribes and illegal commissions to win building contracts. Such practices continued to such an extent that in 2006, the Anti-Corruption and Civil Rights Commission included the art program on its list of the most corrupt state-run programs in urgent need of reform, urging the Culture Ministry, the government authority in charge of the program, to develop immediate measures. “It has been 15 years now since the law was put into operation, but irregularities associated with the program still continue today, though they have been on the decrease,” said Yang Hyun-mee, a professor of culture and arts management at Sangmyung University.

Experts like Yang blame the corruption partly on the law’s forcing owners with no artistic inclinations to dole out cash.

“On the part of many building owners and artists who are commissioned by building owners, it is something they must do even if they don’t want to,” said Yun. “In that context, some criticize the program as constituting excessive government regulation over the private sector.”

Facing such criticism, the government relaxed the law in 2000, lowering the required spending on art from 1 percent of construction costs to the current 0.7 percent. Unfortunately, the situation didn’t improve.

“What was found during a survey last year of local building owners regarding their opinion of the program was that the majority of them still felt burdened by it,” Yang said.

“Bad practices actually stem from the pressure building owners feel to conform to the law while lacking an understanding of the program, or of art.”

To respond to continued opposition to the program among landlords and the local art community, the Culture Ministry came up with a reform bill last year, proposing an “optional contribution system.”

Under the revised law, building owners would be required to choose either to install art in their buildings as before, or contribute a specified amount to a public fund - an amount lower than the threshold for spending on art.

“The system, if it is passed, is likely to lift a burden from building owners’ shoulders, positively contributing to the eradication of longstanding irregularities concerning the program,” Yang said.

It’s similar to what some municipal governments in the United States have done, including Santa Monica, California.

Barbara Goldstein, a member of the U.S. Public Art Network Council and public art director for the City of San Jose Office of Cultural Affairs, explained the similarities when she was visiting Seoul two weeks ago for a public art event.

“The City of Santa Monica, California has a requirement for all private developments to include 2 percent [of costs] for on-site public art as a design requirement.

“As an alternative, developers may contribute an equivalent amount of money to the Cultural Trust Fund, which is administered by the city government. This fund is used to implement programs and projects that meet the goals of Santa Monica’s cultural plan,” Goldstein said.

Whether such a system will work here, however, is still in question.

“The optional contribution system is surely positive in that it gives options to building owners, and that the fund, based on contributions made by building owners, can also be used to enhance public art in general,” art consultant Yun said. “However, whether the system will be effective remains to be seen. You know, building owners can still opt to carry it out on their own, getting the difference [between the fund contribution requirement and the art budget requirement] back as a kickback.”

The Culture Ministry hopes stricter quality regulations for builders who do choose to fund their own art projects will prevent that from happening.

“We plan to establish a pool of experts who can act as evaluation committee members on the central government level,” said Lee Ji-hyun, a Culture Ministry official in charge of the program.

Rules on art quality are much stricter in many cities in California, Goldstein said.

“Private developers can select their own arts consultants to develop public art projects, but those private development projects are required to go through a rigorous review process that includes review of the art plan, artist selection procedures and aesthetic review of the project as it is developed,” she said.

While the Culture Ministry’s revised bill that would establish the culture fund option and the national evaluation committees still has a long way to go amid industry skepticism and an unyielding opposition in the legislature, it is expected to be on the agenda soon.

“We plan to submit a revised bill to the National Assembly soon with the hope that it will take effect within this year,” Lee at the Culture Ministry said.

Additional measures may still be needed, however, according to Professor Yang at Sangmyung. “Currently there is no official body that building owners can turn to for consultation, and it would be much better if there were such a body that included experts in the field and could act as a consultative body,” she said.

There may be no surefire way to rid downtown of cookie-cutter art, but Yun has an idea.

“I think that expanding the art program to include not only fixtures, but also an array of art projects, including exhibitions and performances taking place at the building and other cultural activities, according to the given company’s concept, is worthy of consideration,” he said. Under the current regulations, the art must be permanent, contributing to an overwhelming number of sculptures.

“It will take some time for building owners to accept the mandatory program in a positive way,” Yun said. “However, considering an increasing number of companies take an active interest in the ‘art marketing’ strategy, we can be still hopeful that the program will be accepted as not just a regulation, but a facilitator for their cultural activities and a way to enrich society’s cultural environment.”

Some companies have already taken that lesson to heart. Korea’s largest steelmaker, Posco, spent 1.7 billion won ($1.4 million) to have world-renowned experimental sculptor Frank Stella build “Amabel” in front of its headquarters in southern Seoul. Though its chaotic steel form has provoked controversy among passers-by, it can’t be called boring.

Other companies, too, have chosen unusual, creative pieces for their buildings. The most prominent is probably the “Hammering Man” by Jonathan Borofsky, which watches over Gwanghwamun from the Heungkuk Life Insurance building in downtown Seoul.