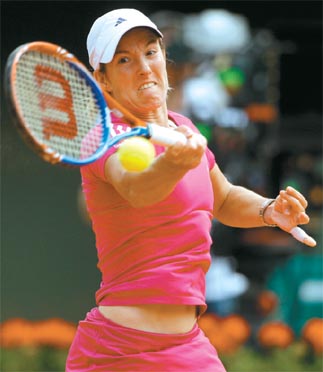 Belgium’s Justine Henin returns the ball to Bulgaria’s Tsvetana Pironkova during their first round match for the French Open tennis tournament. [AP/YONHAP]

PARIS - Four-time champion Rafael Nadal began his bid to wrest back the French Open title by dismissing Gianni Mina of France 6-2, 6-2, 6-2 on Tuesday, despite struggling at times on his serve before extending his record to 32-1 at Roland Garros.

Nadal, who was upset by Robin Soderling in the fourth round last year while struggling with knee tendinitis, committed 28 unforced errors and had to save nine break points against the 655th-ranked Mina.

“First day here is always a little bit more nervous than usual,” Nadal said. “I think I played bad. I played poorly because I made a lot of unforced errors. But I won anyway, without any problem, so that’s always important and a positive thing. But I think I can do much better in the next round.”

Nadal is unbeaten on clay this year, having won titles at Monte Carlo, Rome and Madrid. But the 23-year-old Spaniard refused to say that he is the clear favorite to win the title again.

“The only favorites are the players who are going to be in the final,” he said. “Right now, it is very difficult to speak about the favorite. I know that if I play my best tennis I will have chances to play a good tournament, but a lot of players think the same.

“I feel good, this is the most important thing for a sportsman. I went through bad moments last year.”

Mina, who was making his Grand Slam debut after making the boy’s tournament final last year, made Nadal work hard on his serve but repeatedly failed to come up with something special on his break points.

Earlier, Justine Henin took a big step in her return from retirement by beating Tsvetana Pironkova 6-4, 6-3 in her first-round match. The match was Henin’s first on center court at Roland Garros since 2007, when she won the tournament for the fourth time.

“I didn’t know really what to expect and how I was going to deal with my emotions,” the Belgian said. “As I walked in and I was into my match, I felt a lot of things were coming back. It was just fantastic to share this again with the crowd, as they gave me one more time great support. So it was very good to be back.”

Henin rejoined the tour in January after a 20-month retirement, and while she’s seeded only 22nd, she’s considered one of the favorites for the title.

“She has all of the chances to win this tournament,” said Pironkova, who had played - and lost to - Henin three times before. “She still plays great. I don’t think she lost [anything] with that rest that she had. I think she is playing even better. She’s faster, and her strokes are more secure.”

Henin endured some ragged moments in the second set, when Pironkova won three consecutive games for a 3-2 lead. Henin swept 10 points in a row to regain control, and following another wobble serving at 4-3, she took the final six points.

“I didn’t serve really good in that match, that’s for sure,” Henin said. “First round is never easy. So I’m just happy I came through.”

Henin hit picturesque backhands, nifty drop shots and booming overhead slams - all staples in a repertoire that has helped her win seven Grand Slam titles. But she also missed more than half of her first serves, and blew a handful of easy put-aways.

“I’ve worked pretty hard in the last few months, but the way is still very long,” she said. “I’m probably less consistent now than I was in terms of keeping the intensity all the time.”

Despite the inconsistent play, Henin extended her winning streak at Roland Garros to 22 consecutive matches and 37 consecutive sets. She hasn’t lost at the French Open since 2004.

Kimiko Date Krumm of Japan also made a successful Roland Garros comeback, beating two-time runner-up Dinara Safina 3-6, 6-4, 7-5. The 39-year-old Date Krumm, who ended a 12-year retirement in 2008, was playing in the French Open for the first time since 1996. She’s the second-oldest woman to win a match in the tournament.

No. 12-seeded Maria Sharapova began another bid for the only major title she has yet to win by beating qualifier Ksenia Pervak 6-3, 6-2.

Other seeded women advancing included No. 13 Marion Bartoli, No. 16 Yanina Wickmayer, No. 18 Shahar Peer, No. 21 Vera Zvonareva, No. 23 Daniela Hantuchova, No. 25 Zheng Jie and No. 29 Anastasia Pavlyuchenkova.

The match was Roddick’s first on clay since he lost in the fourth round at Roland Garros last year. The sixth-seeded American barely avoided losing his opening French Open match for the fifth time.

“There was a lot of ugliness out there today,” Roddick said. “But, you know, at the end of it, I get to play again. You go into a day hoping to get through a day, and I got through today.”