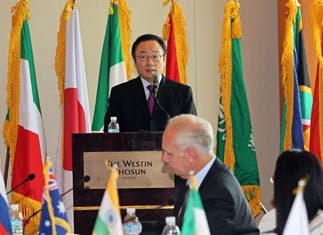 Amid varying ideas for the focus of the G-20 Summit in November, ambassadors from member states met yesterday and agreed on one thing: The need to take internationally coordinated action to prevent a vicious cycle of financial depression.

The Pre-G20 Ambassadors’ Conference attracted more than 100 participants, including foreign ambassadors from G-20 countries; Sakong Il, the chairman of the Presidential Committee for the G-20 Summit; and Park Chul, president of Hankuk University of Foreign Studies.

“The financial and economic crisis has made our interdependence even clearer,” said Jonathan Knott, minister counselor of the British Embassy. “The process of globalization - which has brought so many benefits to developed and developing countries alike - has linked our economies at a time of crisis, too. Countries can no longer decide their policy response in isolation. This is why G-20 is important.”

“The agenda so far has been mostly concentrated on developing countries,” Sakong said in a keynote speech at the Westin Chosun Hotel, in central Seoul. “We feel that we should take up those issues and concerns of emerging countries as well.”

Ted Lipman, the Canadian ambassador to Seoul, said the G-20 is not merely an extension of the G-8 Summit. “G-8 and G-20 are distinct, but they are complementary,” said Lipman. Canada is hosting a G-20 Summit in Toronto next month, and he said it important that there be coherence between the two summits.

Mark Tokola, the deputy chief of mission of the American Embassy, said the November summit in Seoul will be a turning point, as it is the first time a non-G7 country has hosted the event. “Korea is a unique example. As a country that turned from an international recipient to an international donor, it bridges developing and emerging countries,” he said

While G-20 ambassadors from developing countries said the Seoul summit should focus on mitigating the impact of the current financial crisis, emerging countries such as Indonesia said the talks should shed light on other issues as well. Nicholas Tandi Dammen, the Indonesian ambassador, said the G-20 Summit should also reflect the Doha development agenda set out by the World Trade Organization’s multilateral trade talks.

The Pre-G20 Ambassadors’ Conference was hosted by Hankuk University of Foreign Studies and sponsored by JoongAng Ilbo, the Presidential Committee for the G-20 Summit, and others.