Prince of Persia: The Sands of Time (12) 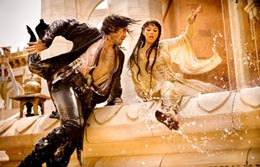 Based on the popular video game, this action-adventure tells the story of a prince who teams up with a rival princess to save the mystical land of Persia.

Dastan (Jake Gyllenhaal), a rogue prince, teams up with Tamina (Gemma Arterton), a rival princess, to defeat a nefarious nobleman who covets a legendary gift from the gods called the Sands of Time, which can reverse time and allow its possessor to rule the world. As the villainous man would use the power to destroy the world, Dastan and Tamina have to prevent the Sands of Time from falling into the wrong hands.

Directed by renowned designer Tom Ford, this movie tells the story of an English professor who tries to go about his typical days after the sudden death of his partner.

A native Brit, George Falconer (Colin Firth) is an English professor at a college in Los Angeles, and has been having hard time coping with life since his partner, Jim (Mathew Goode), died in a car accident eight months ago. One day, George decides to get his affairs in order before he commits suicide that evening. While he rountinely prepares for the suicide and post-suicide, George reminisces about his life with Jim.

But George spends the day with various people who see him as being sadder than usual and who affect his own thoughts about what he is going to do. Those people include his best friend, Charley (Julianne Moore), who may be in love with him; Carlos (Jon Kortajarena), a Spanish immigrant and aspiring actor who has recently arrived in Los Angeles, and one of his students, Kenny (Nicholas Hoult), who seems to be interested in his professor beyond English class.

Adapted from poet Blake Morrison’s best-selling memoir by screenwriter David Nicholls and directed for the screen by Anand Tucker, this film explores the complex emotional layers of the relationship between a father and son.

Blake Morrison (Bradley Johnson) has had a difficult relationship with his father Arthur Morrison (Jim Broadbent) since his childhood, when he discovered his father’s affair. However, when Arthur is diagnosed with a terminal intestinal cancer and has only a few weeks left to live, Blake travels to Yorkshire, where he grew up, to help his mother and sister take care of his father. While visiting his father at the hospital, he contemplates the intimacies and irritations of their relationship for the first time. After his father’s death Morrison questions the nature of the bond between them, articulately expressing the contradictions, frustrations, love and loss bound up with the complicated relationships most of us have with our parents as we grow up.

Soo-kyeong (Jeon Hye-jin) is a visually impaired woman who runs a flower shop and takes care of her uncle (Kum Dong-hyeon), who has the mentality of a 5-year old. Despite the difficulty of taking care of her uncle, who is her only family, while managing her own disability, Soo-kyeong is happy. One day, two men appear in Soo-kyeong’s life - Chan-woo (Seong Hyuk) and Woo-taek (Kim Do-yong). As Soo-kyeong and Chan-woo become close, Woo-taek becomes possessive of her.

A case of mistaken identity turns a bored married couple’s attempt at a romantic evening into something more thrilling and dangerous.

Phil Foster (Steve Carell) is a tax adviser and his wife, Claire (Tina Fey), is a realtor from New Jersey. Every week, the couple has a “date night” - they go to dinner at local restaurant and watch a movie. It has all become very routine. When they learn that their best friends, Brad (Mark Ruffalo) and Haley (Kristen Wiig), are getting a divorce, Phil tries to get them out of the routine. To reignite the romance in his marriage, he takes his wife to a popular new restaurant in Manhattan, even though they don’t have a reservation. When they find there’s no table for them, Phil decides to take the reservation of the Tripplehorns, a couple who doesn’t show up. Halfway through the dinner, two men - Collins (Common) and Armstrong (Jimmi Simpson) - approach Phil and Claire believing they are the Tripplehorns and question them about a stolen flash drive that belonged to mobster boss Joe Miletto (Ray Liotta). Despite Phil and Claire’s explanation that they are not the people the men are looking for, the men don’t believe them and the couple has to find some way out of the situation.