A stitch back in time by a living treasure

A stitch back in time by a living treasure

Ask an expat here about traditional Korean crafts. She might mention hanji paper, or folk painting, but certainly quilting won’t be in the top five.

But in fact, Korea has its own unique style of quilting, known as nubi. In nubi, cotton wadding is stitched in fine lines between two pieces of cloth. It’s long been used in Korea to make insulated clothing - coats, jackets, underwear and more.

In winter 2009, Chanel’s “Coco Cocoon” bags were a major hit. Stuffed with cotton, the quilted bag won attention for its softness and lightness. Goose feather parkas quilted horizontally were also very popular around this time.

Yet these pieces contain fewer stitches than nubi clothing, which is stitched incredibly finely, at a width of less than 1 centimeter (0.4 inch).

Traditional Korean methods and materials are rarely sought after on the international market.

But Kim Hae-ja, a leading nubi artisan and a designated National Important Intangible Cultural Property, believes that nubi could have a global future. 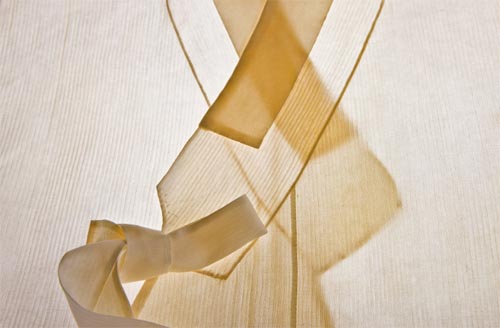 In Western quilting, small pieces of cloth are sewn together into articles of clothing or blankets. In Korean nubi, by contrast, the stitches cover the entire garment.

Another difference: Nubi does not involve embroidery or decoration. According to Kim, Western quilting is associated with fancy technique, while nubi is the pinnacle of simplicity. Kim values spirit over technique, she says.

In 2003, Kim exhibited her work at the Tokyo International Great Quilt Festival. She said locals had high praise for her work, calling nubi a breath of fresh air amid the extravagance of the other displays.

This year, the festival organizers held a survey asking spectators which exhibitions they would like to see again. Kim’s nubi exhibition from seven years ago landed in first place, attesting to the appeal of her simple philosophy.

When Kim was invited to the 2010 Tokyo International Great Quilt Festival as part of the main display, she was beset with a storm of requests for a demonstration. When she consented, people flocked to see her working, some taking notes on even the most minute details.

“I realized that the Japanese wanted to learn nubi to use it for their clothes and designs,” Kim said. 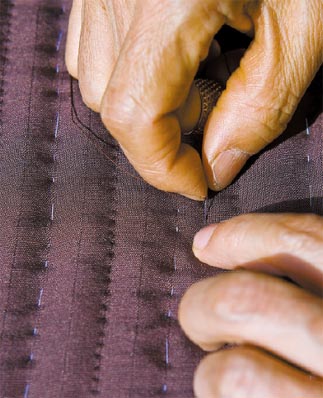 Kim uses broad stitching for nubi, above, while backstitching is commonly used for ready-made nubi products. Top, a finely stitched nubi garment made by Kim. By Kwen Hyek-Jae

She reflected on that for a while, eventually reaching the conclusion that “it doesn’t matter [who does it] as long as it’s put to good use for people.”

During her stay, Kim bought a variety of prefabricated quilting kits elderly Japanese women buy to make ornaments and bags. After studying them, Kim decided that nubi could be similarly popularized as a hobby through such kits.

“It’s difficult to begin nubi on your own. But half-finished kits are easy for anyone since you just need to sew the patterned cloth.”

Kim believes that nubi’s elegance makes it a natural target for internationalization. “Nubi itself contains the philosophy of going forth everywhere into the world.”

Although she is a National Important Intangible Cultural Property, someone who preserves the valuable techniques of the past, Kim continues to tackle the challenges of creating new designs. Some of her attempts so far include dresses, children’s clothing, wallets and even business card holders.

But modern designers face the same dilemma when they attempt to use nubi, since the process is completely different. That’s why a new crop of nubi designers is needed, she said. 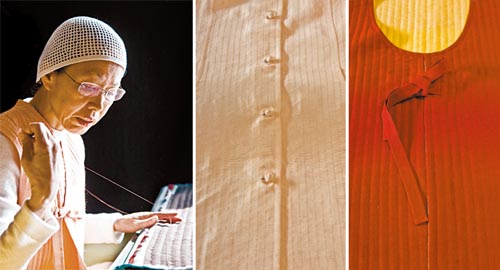 In 1992 Kim surprised the world by presenting traditional 3-millimeter (0.1-inch) and 5-millimeter nubi stitchwork - techniques that hadn’t been performed for almost 100 years - at the Korea Annual Traditional Art Handicraft Exhibition. Her performance won her the Prime Minister’s Award.

Kim, who earned her living through sewing and managing a hanbok store, became the youngest National Important Intangible Cultural Property at the age of 40 in 1996. As Korea’s first modern nubi artisan, Kim said that she taught herself to recreate nubi simply by looking at old clothes in museums.

“Museum artifacts were my mentors. I was somehow able to make the nubi clothes that I had seen displayed at museums. I was never stuck when it came to sewing. The important thing is to empty out your mind and heart completely and focus only on the object in front of you.”

Kim said that life as a National Important Intangible Cultural Property is like having the wind constantly push you forward.

Endless crowds have gathered to learn sewing from her over the past 15 years. Her students, Kim said, are her proudest accomplishment, especially since today, many of her pupils have spread out all around the country, teaching their own students.