Maradona promises a streak, with luck

Maradona promises a streak, with luck 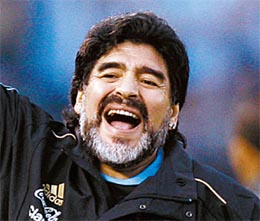 BUENOS AIRES - Diego Maradona has promised to run naked through the center of Buenos Aires if Argentina wins the World Cup.

The Argentina coach made the promise during a radio show on Tuesday. The unpredictable Maradona was speaking a day after Argentina defeated Canada 5-0 in its final warm-up match before the World Cup.

“If we win the World Cup, I’ll get naked and run around the Obelisk,” he said, referring to the tall monument that marks the center of the city and serves as its most famous landmark.

Maradona’s response came after a reporter asked him in the interview what he would do if his team returned to Argentina with its third World Cup title. In the same interview, Maradona said he had to explain to Lionel Messi why he did not play against Canada. Messi is the reigning FIFA player of the year, but sat out the match to protect him against any possible injury.

“If something would have happened to you in that match, I’d have been shot - you know where,” Maradona said he told Messi.

Maradona has the luxury of choosing between some of the world’s best forwards. In addition to Messi, he can use Carlos Tevez, Gonzalo Higuain, Diego Milito, Sergio Aguero and Martin Palermo. The team also boasts Liverpool star Javier Mascherano, Juan Sebastian Veron, Jonas Gutierrez and Angel di Maria in the midfield.

Despite its deep roster, Argentina was inconsistent in the regional qualifiers and Maradona received heavy criticism.