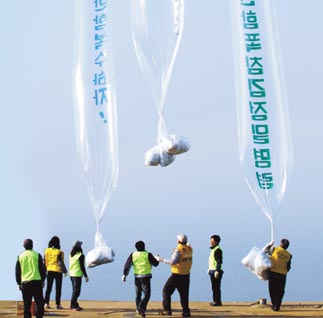 Fighters for Free North Korea, a Seoul-based anti-North civic group, has sent more than 30 million propaganda leaflets to North Korea over the past seven years.

And with the South Korean government’s pledge to resume psychological operations against Pyongyang in the wake of the Cheonan attack, the group will have its hands full.

“Only a while ago, we had officials from the Unification Ministry telling us to refrain from sending leaflets,” said Park Sang-hak, head of the civic group. “But I guess the government stance has changed since.”

The JoongAng Ilbo interviewed Park, 42, on Wednesday, the same day he was visited by two Defense Ministry officials handling psychological operations. Park - an old hand at these interrogations, having been questioned by police a dozen times during previous administrations whose policy was to engage North Korea - was grilled about who wrote the messages on the leaflets, and how the group was printing them. 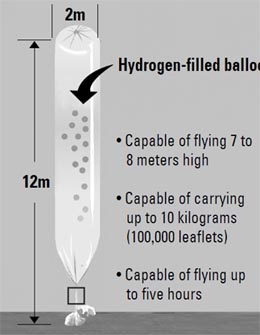 Park later gave the officials samples of the leaflets, as well as a CD containing videos showing how they are produced.

Park’s group’s most recent propaganda drop was May 20, the same day that a multinational team of investigators released their report concluding that North Korea had attacked the Cheonan.

The leaflet titled “The Cheonan Warriors, the Republic of Korea Will Take Revenge” read that, “Kim Jong-il, the main instigator of treason, slaughter, invasion and terrorism, blew up the Cheonan.”

Park, a North Korean defector who came here in 2000, said he began producing and sending propaganda messages in 2004. The messages are flown to the North in hydrogen-filled advertising balloons, each 12 meters (39 feet) long and 2 meters wide. Park said each balloon can contain up to three bundles of leaflets, and each bundle contains 30,000 leaflets.

The bundles are separated from the balloon at different times. Park explained that the first one drops about an hour into the flight, while the last can be in the air for up to five hours after the balloon leaves Paju, Gyeonggi, before falling near Pyongyang.

It costs about 5 million won ($3,990) to send out 100,000 leaflets, Park said, adding that membership dues from two U.S.-based bodies - the North Korea Freedom Coalition and the Defense Forum Foundation - help cover the expenses.

Park said he got involved with the work because he believed the civic sector needed to step in after the two Korean governments agreed in 2004 to stop propaganda activities.

“I will deliver the message of freedom until North Korea gets its act together.”