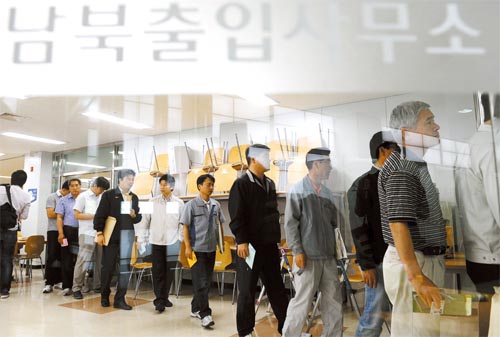 The Dorasan immigration office, just south of the demilitarized zone in Paju, Gyeonggi, is packed with workers from the Kaesong Industrial Complex who cast ballots yesterday morning. [YONHAP]

Absentee voting for next week’s local elections began across the country, with some 931,000 registered voters poised to cast ballots, officials at the National Election Commission said.

The Dorasan Customs, Immigration and Quarantine (CIQ) office in Paju, just south of the demilitarized zone, was packed with voters from the Kaesong Industrial Complex, who traveled south amid escalating tension between the two Koreas.

They returned to Kaesong shortly before North Korea said it would halt traffic into the complex from the South.

The National Election Commission said that of the 374 registered absentee voters working in Kaesong, 268 voted yesterday for the June 2 elections.

The workers occupied tables in a cafeteria on the second floor of the CIQ office and carefully examined campaign materials.

“Tensions are running high between the North and the South and I need to study them thoroughly to pick the right candidates,” said a man surnamed Kim, a 45-year old manufacturing company worker, who studied the documents for 20 minutes.

“I believe that people working in Kaesong will cast their votes for candidates who can help solve the problems in inter-Korean relations.”

Kim Jong-ik, 58, a textile company worker, said he registered for an absentee ballot for the first time because he feared that his factory would be closed as inter-Korean relations worsen.

“I’ve worked in Kaesong for one year and seven months and the situation has never been as serious as now,” Kim said.

“The Kaesong Industrial Complex is shaken whenever conflict breaks out in inter-Korean relations and it is hard for me to endure the situation,” said Lee Suk-ja, head of a local apparel company, Manseon Corporation.

An official with the National Election Committee’s Paju office said he was surprised at how many Kaesong workers are taking the elections seriously.

“This is the first time I saw so many voters from Kaeseong reading election materials,” the official said. “They seem to be more ardent with their vote because of the current inter-Korean relations.”

Other workers said they don’t see the Cheonan sinking relating to next week’s vote.

“These are just local elections,” said Park Tae-seok, a worker at the manufacturing company Daehwa. “I live in Incheon and I will vote for a candidate who promises free school lunches for poor children.”

Ku Sun-hoi, Park’s colleague, said he will vote for candidates who are known for experience and integrity.