Korea’s gardens at the height of their seasonal glory

Korea’s gardens at the height of their seasonal glory

The Chollipo Arboretum in Taean, South Chungcheong, considered Korea’s first private arboretum, has about 12,000 species of plants - the most of any single arboretum in the country. [JoongAng Ilbo]

When you need a distraction from your daily routine, maybe you meet a few friends and chat with them over a nice cup of tea, go to the movies, or have fun at an amusement park. But this time of the year, perhaps you should consider heading outside, to enjoy Seoul’s arboretums and botanical gardens at the peak of their seasonal beauty.


Season of the iris

In particular, you could head out to see the iris, which is in full bloom in May and June. As its name, which means “rainbow” in Greek, implies, the iris comes in a nearly endless palette of colors. And there’s a staggering variety on display at the Seoul Iris Garden, nestled between Mount Dobong and Mount Surak in northern Seoul. The garden, operated by the Seoul city government, stretches over 52,000 square meters (560,000 square feet) and is home to 130 species of iris, 78 species of herbs and 57 species of trees.

The facility celebrates its first anniversary on June 7.

“When we just opened, the visitors were mostly residents of this neighborhood, but these days there are an increasing number of outside visitors, particularly those who visit this area for mountain climbing,” said Lee Yeon-jung, the Seoul government official in charge of managing the garden.

“Here you can see not only irises, but also various kinds of herbs, which is why we have a group of school kids coming to learn about the diversity of plants and nature.” 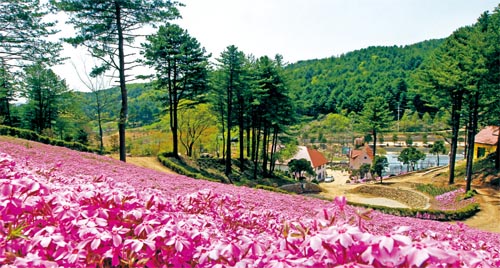 At Yoo Botanic Garden, a variety of trees and plants are arranged according to themes, stretching from the bottom of a slope up through the hills. But the focus is on the iris. [JoongAng Ilbo]

Yoon Pyung-hee, 64, described the Seoul Iris Garden as a haven for those weary of the busy city life.

“I have been a regular visitor here since its opening last year, and today I have brought some of my friends to show them there is a nice place like this,” said Yoon, a resident of Dobong, who visited the garden late Thursday afternoon with several friends her age after climbing Mount Dobong together.

“I’m glad that we have such a place as this in Seoul. I had lived in Jamsil until I moved to this area a couple of years ago, and I just love this area with mountains and places like this where I can enjoy nature,” she added.

“Our first official event since the opening last year was the Iris Festival, which was held last weekend. While there are no other events currently in the pipeline, we will come up with more diverse events in coming years to let more people know about this place,” said Lee at the Seoul Iris Garden.

Though the Iris Festival has ended, visitors will still be able to enjoy the splendid flowers near the garden’s ponds until late June. The best way to reach the garden is by subway. It’s located right across the street from exit 2 of Dobongsan Station, lines No. 1 or 7, and it’s open from 5 a.m. to 10 p.m. Admission is free. For more information, call (02) 954-0031.


No longer members only

The Chollipo Arboretum in Taean, South Chungcheong was established in 1970 by the late Min Byung-gal, an American who was naturalized as a Korean in 1979. It was designated as an arboretum of merit by the International Dendrology Society in 2000, the first in Asia and only the 12th in the world.

The arboretum has about 12,000 species of plants - the most at any single arboretum in the country. Chollipo, considered Korea’s first private arboretum, was opened to members only until March 1 last year, when its doors were opened to the public.

Still, the areas non-members can view are still quite limited, and can be seen in an hour-long stroll. Commanding views of Manlipo Beach can be had from the arboreteum’s observation platform.

One of the species worthy of note here is the magnolia, which recently finished blooming, and the weeping willow, a number of which stand beautifully around a water garden inside the arboretum.

The Hantaek Botanical Garden in Yongin, Gyeonggi, opened seven years ago and is the largest botanical garden in the country, covering 600 square kilometers including the 230-square-kilometer East Garden, which is open to the public. Because of the size, visits need to be carefully planned.

Kim Jin-bong, an official at the garden, said, “I advise you to head east starting from the hill in the west of the garden.”

There are two must-see locations inside Hantaek - the Children’s Garden and the Ecology Park. The Children’s Garden is actually eight different flower gardens with various themes, and it has a place for kids to learn about nature while playing. The nearby Ecology Park, which could be called the heart of Hantaek, includes about 1,000 species of rare, wild plants carefully tended on sloping hills, including the flower in the anemone family known in Japan as the azumaichige. Each plant’s surroundings have been carefully created to fit their respective needs. At the top of the garden, there is a trail leading to Mount Bibong, 370 meters above sea level.


The subtle scent of the iris

The Yoo Botanic Garden in Pocheon, Gyeonggi, is, like the Seoul Iris Garden, dedicated to the iris, and since it opened in summer last year, the garden has already acquired a startling variety from around the world. With about 1,000 different species of irises on 200 square kilometers of land, Yoo surpasses its Seoul counterpart in terms of both its area and diversity.

“We have about 70 percent of all the species of iris from around the world,” said Yoo Sang-hyuk, the owner of the garden. Thanks to his dedication to the flower over the past two decades, Yoo’s garden now has its own hybrid irises, which number around 500.

Cross a white iris and a violet iris, Yoo said, and you will get a pink iris - that’s why there are irises of so many colors. There is even a festival showcasing irises of new colors held every spring in Europe and, according to the gardener, the flowers vary in scent as well as hue.

“Blue irises have the smell of the sea, while chocolate-colored irises actually smell sweet,” he said.

The Korea Botanic Garden in Pyeongchang, Gangwon is unique in that it cultivate only flowers and trees native to Korea. Here you can see the species Iris odaesanensis, which exists in the wild only on Mount Odae and nowhere else in the world, along with many endangered species of plants, most of which call the more frigid, remote corners of the peninsula home.

Besides a special preservation facility for rare specimens, there is a spacious garden of 100,000 square meters along one side of Mount Odae where you can take in a sweeping landscape of native flowers, stretching like a natural trail up the side of the mountain. In summer, the Aster koraiensis, or Korean starwort, are in full bloom, turning the foot of the mountain into a vast sea of lavender and green. There is also a garden of poisonous plants, including noxious herbs actually used in nefarious plots during the Joseon period.

It may be hard for the layperson to tell the difference between an arboretum and a botanical garden, since both have flowers and trees. However, there is a difference: An arboretum serves primarily as a research center, while plants in a botanical garden are there first for viewing purposes. That’s why Korea’s arboretums fall under the jurisdiction of the Korea Forest Service, while its botanical gardens are operated by the Ministry of Culture, Sports and Tourism.

A private garden of 3 hectares of land or more with over 1,000 species of plants is categorized under the law as a private arboreteum, which is why the Hantaek Botanical Garden and Korea Botanic Garden are classified as arboretums despite their names. There are now about 31 arboretums registered with the Korea Forest Service around the country.